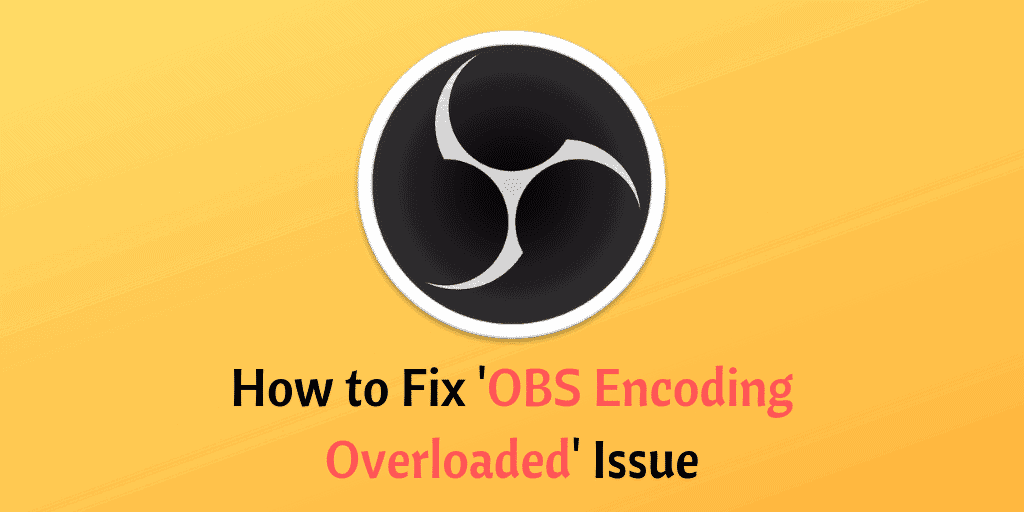 OBS has a reputation for being amazing at recording and streaming to sites like Twitch and YouTube, and like all video-capturing programs, it can be heavy on computer hardware.

The main role of OBS is to stream content to streaming platforms, but it is also very capable of acting as a simple screen recorder. All things considered, it’s not surprising that OBS encoding is overloaded to drive users crazy.

This isn’t a new problem that users face; it’s just one that most people don’t understand or know how to fix. If you fall into this group, then read on and find out the important details.

What is OBS Encoding?

Even with a powerful computer with the latest (and greatest) CPU and GPU, OBS notably impacts the computer’s performance.

Especially if you are streaming, this is something you’ll notice. It’s not just with OBS; most screen recorders and streaming tools use many computer resources.

Why does this happen? Every single frame of your display must be processed, encoded, and then saved or streamed. This applies to both video and audio capturing.

Your hardware constantly deals with this process while you use OBS, impacting the computer’s performance. Streaming is more resource-intensive because your processor has to process networking tasks too.

During the encoding process, OBS has to convert all of those frames and audio packets. If your hardware can’t process the recording fast enough, then this results in OBS encoding overloaded popping up.

So, that’s what encoding is in the context of OBS, but what are the main things that actually cause encoding overloads?

Most of the time, users experience OBS encoding overloaded because they aren’t well-versed in computers. Simply put, they don’t fully understand what the OBS settings mean nor how to set them up. OBS is not an easy piece of software to use!

PS: Here, you will learn more about the best OBS alternative for your reference.

Finding a resolution to encoding overloading isn’t a “one solution fixes all” matter. Since there are a handful of reasons for it occurring in the first place, there are even more solutions. Here are the best things to try.

Even if these tips don’t completely fix OBS encoding overloaded, at the very least, they will improve your encoding situation and ease your hardware’s load.

Besides, click here to learn more about the top vMix alternatives.

If you also notice poor video quality recording alongside video encoding problems, here is a solution you can try.

After making these advanced setting changes, you should notice a few things. As well as recordings having better video quality, they should also be smoother than before.

Obviously, OBS is a very technical program, and OBS encoding overloaded is far from a rare encounter. It isn’t the only recording software available to you, though. Consider DemoCreator, a straightforward solution that has just as much as OBS to offer.

Let’s face it: as impressive as OBS is, it’s not an easy program to use. It is meant for experienced computer users who understand advanced details about video capturing. DemoCreator is the opposite; literally, anyone can start using it.

One key feature worth pointing out is the editing studio. As soon as you finish recording, you don’t have to worry about exporting and importing the video on a complicated video editing solution. DemoCreator supplies you with all of the basic editing tools you need.

Because DemoCreator is a lightweight video recorder, it’s unlikely you’ll face issues like OBS encoding overloaded. Even lower-end laptops should be able to record with it to an extent. In addition, here are the Fraps vs. OBS comparison FYI.

Do you want to become a YouTuber or a Twitch streamer, but complicated issues like OBS encoding overloaded trap you? It’s a long journey, but success can be a reality with the right arsenal of properly configured tools.

Hopefully, by understanding what OBS encoding is, what causes it, and how to resolve it, you can get the most out of OBS.

On the other hand, if your computer isn’t powerful enough, you should look elsewhere towards DemoCreator. As an easier recording program to use, and less resource-intensive, it is definitely ideal for beginners!

How Can I Fix My Nintendo Switch Dock Not Working Issue Easily?

AirPods Mic Not Working? Let’s Get It Fixed With Ease!