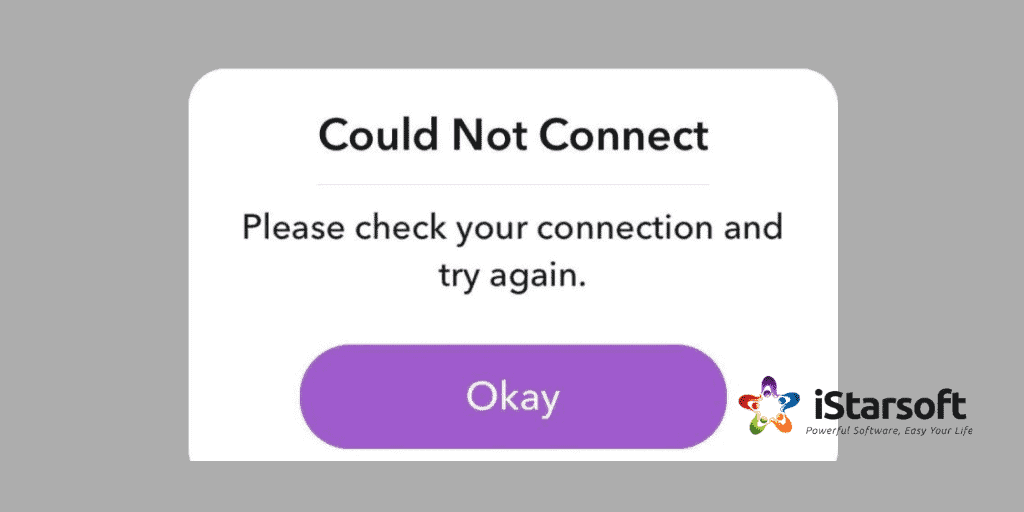 In the recent past, Snapchat has become an essential part of many individuals’ daily schedules. Particularly the young generation has embraced this exciting social media platform warmheartedly.

Under usual circumstances, Snapchat is supposed to function pretty smoothly. However, just like any other social media platform, it can give some trouble due to various reasons.

No matter whether you use an iOS device or an Android, let’s see how to fix this issue easily.

Important
All the options mentioned in part 01 and 02 are built-in options for iOS and Android devices.

If you need a professional solution to fix this ‘Snapchat There Was a Problem Connecting to The Server‘ issue regardless of the device, jump into part 03 straightaway.

Part 1: Solving “Snapchat there was a problem connecting to the server” issue – iOS
01. Check if the network is fine
02. See if the app is crashed
03. Close and restart Snapchat
04. Exit VPN on the iOS device
05. Enable Snapchat to access cellular and Wi-Fi data
06. Perform a reboot on your device
07. Update the Snapchat app
08. Delete the Snapchat app and reinstall it
09. Get rid of the jailbreak tweaks that are incompatible with your iOS device
10. Get in touch with Snapchat Support
Part 2: Solving the “Snapchat could not connect” issue – Android
01. Reboot your Android device
02. Clear cache and app data of Snapchat
03. Reset the App Preferences
04. Clear the cache of Google Play Services
05. Clear framework cache of Google Services
06. Reinstall Snapchat
07. Update Google Play Services
Part 3: Solve’ Snapchat could not connect’ issue using Tenorshare Reiboot

Part 1: Solving “Snapchat there was a problem connecting to the server” issue – iOS

In this part of our article, we explain how to fix the “Snapchat could not connect” issue on iOS devices.

If you are an Android user, you can jump into the next part straight away. This section comprises multiple methods to address the aforesaid issue.

Besides, here, you will find out How to Hack Someone’s Snapchat with No Download No Survey.

01. Check if the network is fine

As you already know, Snapchat is a social media app that works on the internet. So, the very first thing you should do is to check if your internet connection is working fine.

Once you have connected to a stable and speedy network, you can just launch the Snapchat app. If it doesn’t work, the problem is not with the network. In that case, you will have to try other fixes mentioned below in our article.

Also, if you have a problem with the iOS Cannot Get Mail – The Connection To The Server Failed, click to fix it now.

For many users, some errors have taken place due to a crash on the Snapchat app itself. In this case, you will have to check with their official sources.

For instance, you can check their official Twitter page (@Snapchatsupports) and see if they talk about any issues.

If not, you can simply check it through Down Detector. As you may know, Down Detector is an online tool (website) that checks if a website is down.

PS: here, you will learn more about the Snapspy V3.

Sometimes, the ‘Snapchat could not connect to the server’ problem might be a temporary one due to a small glitch associated with the app itself. In this case, you can easily solve it by closing and restarting the Snapchat app.

In fact, force closing and restarting the app can solve various minor issues of any app. Mentioned below are the steps to be taken to close and restart the Snapchat app.

04. Exit VPN on the iOS device

Many individuals use VPNs on their iOS devices due to various reasons. Well, what if you are currently using a VPN on your device and you experience some issues with Snapchat? The solution is to close the VPN and try logging in to Snapchat once again.

In other words, what we recommend is to try using Snapchat without VPN. That is because some of the VPNs may affect the process due to stability issues.

In addition, if you’ve ever wondered how to “added by phone number on Snapchat,” keep reading for step-by-step instructions and other ways to find friends on Snapchat!

Whenever you have downloaded and installed a new app, it requires special permissions, and so does Snapchat. When you install Snapchat, you will see that it asks for permission to use Wi-Fi and cellular data.

Mentioned below are the steps you should consider in order to fix this in an iPhone.

06. Perform a reboot on your device

Performing a force restart or a reboot on your iOS device will address the majority of minor glitches. That is why most iPhone users tend to perform a restart whenever they experience issues. These issues can range from app-related issues to iOS-related lags.

Well, this trick may sound pretty silly to some individuals. However, the truth is that it can be very effective at times.

Also, restarting your iOS device doesn’t require much effort or consume a substantial amount of time. So, as we believe, it is worth giving this option a shot and seeing if it works for you.

Mentioned below are the steps you should follow in order to reboot your iOS device easily.

For iPhone X or newer;

For iPhone 8 or older;

If you are not yet succeeded after all those steps, you should try updating your Snapchat app. By doing so, you will be able to fix potential bugs and errors associated with the current app version, including ‘Snapchat There Was a Problem Connecting to The Server‘.

As you might realize, apps generally offer timely updates to fix issues, introduce new features, and secure the app. The same is true with Snapchat as well. In this case, it is a wise and effective approach to update the respective app.

For many individuals, the updates have actually worked and fixed the potential issues associated with Snapchat.

With that said, it is totally worth giving it a try to see if the update fixes your issue.

08. Delete the Snapchat app and reinstall it

If the problem is persisting, you can try deleting and reinstalling the Snapchat app to fix it. To do this, you should simply tap and hold a Snapchat icon.

Then, you will see a cross icon at the top left-hand corner. Tap it to delete (uninstall) Snapchat.

Go to the App Store once again and download the Snapchat app back. The app should work fine now for most of the users.

09. Get rid of the jailbreak tweaks that are incompatible with your iOS device

Some iOS users have jailbroken devices. These devices come with various tweaks that may be incompatible with the original iOS system. These tweaks can necessarily create negative impacts on the system.

As a result, some of the apps might crash or malfunction. So, if you have a jailbroken device and the Snapchat app gives some problems with it, remove the tweaks.

To get rid of these tweaks, you should necessarily follow the steps mentioned below.

That’s it. You can now see if your Snapchat app works fine.

10. Get in touch with Snapchat Support

If you are yet to succeed, you will have no other option than to get in touch with Snapchat Support. Just go to their Twitter account or go to the support section of the Snapchat official website for help. You can directly ask them about the issue and get a solution.

Also, let’s learn more about how to open a Snapchat without the person knowing with ease.

Part 2: Solving the “Snapchat could not connect” issue – Android

Even Android users use Snapchat very often, and they can experience the same trouble – ‘Snapchat There Was a Problem Connecting to The Server‘ as iOS users. So, this section is dedicated to our Android users.

A large number of issues on your Android device can be fixed simply with a reboot. In addition to that, rebooting helps you clean RAM and make your device run faster and smoother.

To clear the Snapchat app’s cache and app data, you should follow the steps mentioned below.

Please note that clearing cache and app data will delete app preferences and settings of the respective app. As a result, you will have to reconfigure some settings when you use it.

Resetting the app preferences is another way to address this issue. Let’s see how to do it.

Google Services Framework is the tool that synchronizes the data and device data to function properly. By clearing this framework cache, you can bring back this smooth functionality.

Uninstall Snapchat and reinstall it on your Android device. If the app has some issues while functioning, reinstalling a fresh copy will solve it.

In fact, such an update will resolve issues associated with apps like Snapchat as well as Hangouts, Google Plus, etc.

Do you want to know a convenient, professional, and super-fast way to fix the aforesaid issue – Snapchat There Was a Problem Connecting to the Server? If so, you can rely on Reiboot for iOS & Reiboot for Android offered by Reiboot.

It is true that Reiboot for iOS or Android can resolve Snapchat if there was a problem connecting to the server. But, in addition to that, this powerful Toolkit can address various other issues with a couple of clicks only and without any data loss.

The best thing is that this Toolkit is available for both iOS and Android devices. In a nutshell, Reiboot is the ultimate solution to fix all the complex and minor issues.

So, you can just download Reiboot for iOS or Android and start fixing your device now.

Well, that’s how to fix the ‘Snapchat could not connect‘ issue easily. Please let us know if you have any questions.

Best Fixes for an Excel File Not Opening in 2022