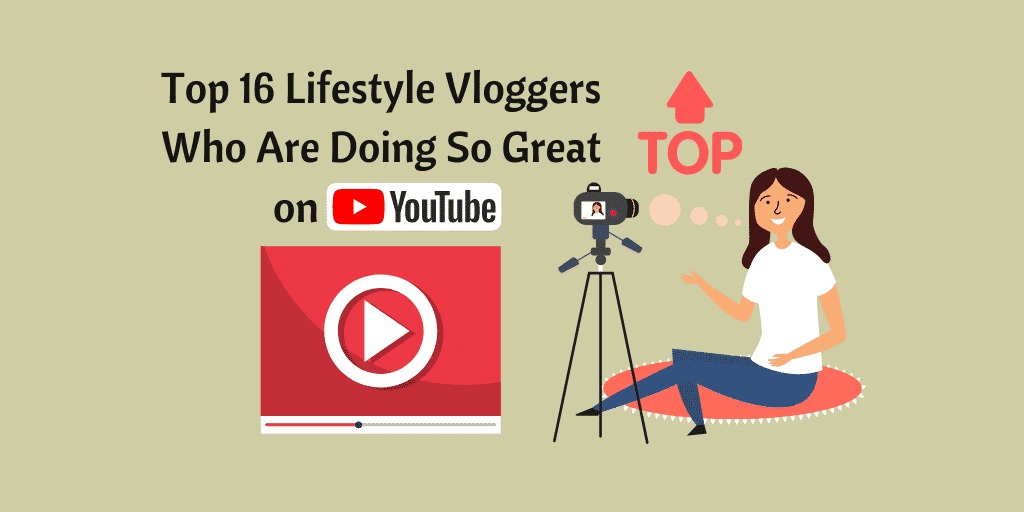 The YouTube world has seen rapid growth in vlogging, and lifestyle vloggers make up to be another very popular category on this platform.

These vloggers don’t belong to any specific niche and create a diverse and vast range of content.

Most of these YouTubers aim to inspire others to use their tips for building a great lifestyle for themselves or getting monetary benefits.

Whatever the case, these vloggers have been doing what the ‘new cool’ is, and here are the top 16 of them to know about.

With the nickname Zoella, she runs two YouTube channels and has authored Girl Online.

Zoe is British and publishes her daily lifestyle vlogs with content around various themes.

She started with vlogging about beauty, haul, and fashion videos and posted about other random things on the second channel that brought him a fan base of over 4 million.

Now she posts Vlogmas and other videos in collab with boyfriend Alfie Deyes, a YouTuber.

PS: here are the top family Vloggers, and female Vloggers for your reference.

She is clearly the favorite of so many YouTube viewers, and her videos are one of the many posted by lifestyle vloggers that are watched regularly by the fans.

She makes videos showcasing her cleaning and organizational talents. Her videos also contain content regarding beauty and body care.

The fans appreciate the tips she gives for cleaning and general organization as being a genuine utility.

She has inspired so many youngsters who don’t feel like doing the regular chores and consider her the true guide for adulting.

Besides, learn more about What to Vlog About.

The YouTube channel of Marissa is based on a very relatable and needed theme: Self-care.

Her videos revolve around the theme of personality development, and she talks at length about how one should care about loving oneself.

There is one video series named Year of you, where she advises people about prioritizing their own desires and needs.

She also publishes videos on grocery hauls, monthly favorites, planning videos, and other vlogs. Her videos have the element of productivity and are very inspirational too.

Like most female lifestyle vloggers, Nicole started her vlogging career with videos on beauty when she established her YouTube channel in 2006.

Her beauty blogs received a lot of love and appreciation, where she would publish videos on product reviews, makeup tutorials, and fashion.

Her career moved to YouTube when her fiancé joined her in the lifestyle vlogs. She has a following huge base of around 3 million viewers.

Another among the lifestyle vloggers who talk about the importance of organization in life, Vasseur’s channel is all about DIY videos based on cleaning and other organizational life skills.

She gives some of the best tips on particular themes, and they help people to become active and neat.

By the way, read more about the top YouTube vloggers.

This female lifestyle vlogger belongs to the city of New York and is surely known for her amped-up approach to vlogging.

She sought to create a YouTube community where she would share tricks and tips about body and hair care, fashion, styling, and makeup.

Their uniqueness is that all of the content is research-based. With time, Tess now makes lifestyle vlogs about traveling, and her husband and friends also appear in those videos.

This lifestyle vlogger chose Cooking to be the mainstay of her YouTube videos.

The cookery videos are not at all as she keeps the fun alive with her chatty attitude and involves some great kitchen tips simultaneously so as not to lose the purpose altogether.

She appears very kind, and viewers feel elated watching her. Since vlogs are a trend right now, Anna seems to make the best use of them.

She can be considered a self-established OG among the community of lifestyle vloggers as she is an experienced vlogger who started in 2008.

She posts videos based on themes like personal vlogs on her journey through tackling infertility, lifestyle, fashion, and makeup statements.

Candy was born in Mexico and raised in Southern California, which is also responsible for amassing a huge fan base of more than 2 million for her. She also has been a part of more than 250 social media branding campaigns.

Her extraordinary life is what Mimi strives to showcase in her daily vlogging videos. She plays two very challenging roles in her life; one is that of being a new mother and an entrepreneur.

Hers is a very inspirational journey where she perfectly balances her two roles of being a homemaker and a businesswoman.

Along with her hubby Alex, she posts life management videos, and they are surely worth a watch.

Unlike the classic lifestyle vloggers, Aspyn Ovard took a slightly different approach when she expanded her horizons and included videos on her family activities and daily vlogs on fashion.

Her hubby Parker Ferris also takes part in those videos, and together they run another YouTube channel where they share videos about deeper life events, vacationing, or just home redecoration.

Their channel is viewed and loved by many people, amounting to nearly 2.5 million.

She has been a very consistent YouTuber who actively posts daily vlogs on her channel.

Her recent videos talk very vividly about adulting, and she would advise on things like pulling up a cheese platter together.

With teenagers as the main audience, Lauren focuses on making videos related to self-personality development; needless to say, they spark a great influence on young minds.

She belongs to Australia, and the themes that she chooses for her videos are very intriguing. Besides the cliché fields of beauty, travel, and fashion, she also makes videos on crime.

The lifestyle vlogs she posts also have her boyfriend appearing in them. She also makes conversational videos, and her channel ‘Get Ready With Me’ has her talking directly with her followers.

A very young lifestyle vlogger who is just 19 has managed to gain around 2 million followers on her YouTube channel.

All of it owes to her random funny videos and the beauty blogging she does on her channel. With the nickname Syd, she documents everything she learns, whether TikTok dances or makeover vlogs.

The videos of her series Day in the Life show her life journey as struggling to live alone as a teen in a different city from the one she was born.

Unlike the restricted lifestyle vloggers, Hailey is the one who loves to experiment. This becomes very visible in the videos she posts on her vlog channel.

There is an infinite range of topics that Hailey has tried to cover in her vlogs, like making fitness videos, advice videos, videos with outfit advice and weekly tips, and carpooling karaoke videos.

Her YouTube channel’s bio tells about her belief that she had not liked to restrict herself to a single image like a beauty expert’s.

She likes to post on random topics and primarily works on sharing lifestyle vlogs on her daily life activities.

A male vlogger among all the other lifestyle vloggers on the list after so long, Olsson belongs to Sweden and believes in keeping a very professional approach towards making vlogs.

He makes videos that document his everyday life events with his son and wife to give closer insights into the viewers about his life.

He also doesn’t miss out on familiarizing people with his fun and other exotic travel adventures in a separate set of vlog videos.

And he posts vlogs every week where on the one hand, he likes to show off his very lavish lifestyle that has luxury cars and yachts in them; on the other hand, he also showcases his busy yet active life in other countries.

This New-Yorker vlogger personifies diversity as he does lifestyle vlogging, makes films, co-directs a multimedia company called Beme, and is the founder of a company called 368, which aims at providing a platform to the creators who want to influence and collaborate creatively.

He started vlogging in 2015 on YouTube but then shifted to directing short films. In 2018, he finally started with lifestyle vlogging about his exciting and energetic routine and gathered a fan base of over 11 million subscribers.

We hope this article about the top lifestyle vloggers has already inspired you to either start doing the same or seek enjoyment and learn from them. Check out the channels of these YouTube celebs and enjoy them.

Qustodio Review: Know About Its Pros & Cons and Features