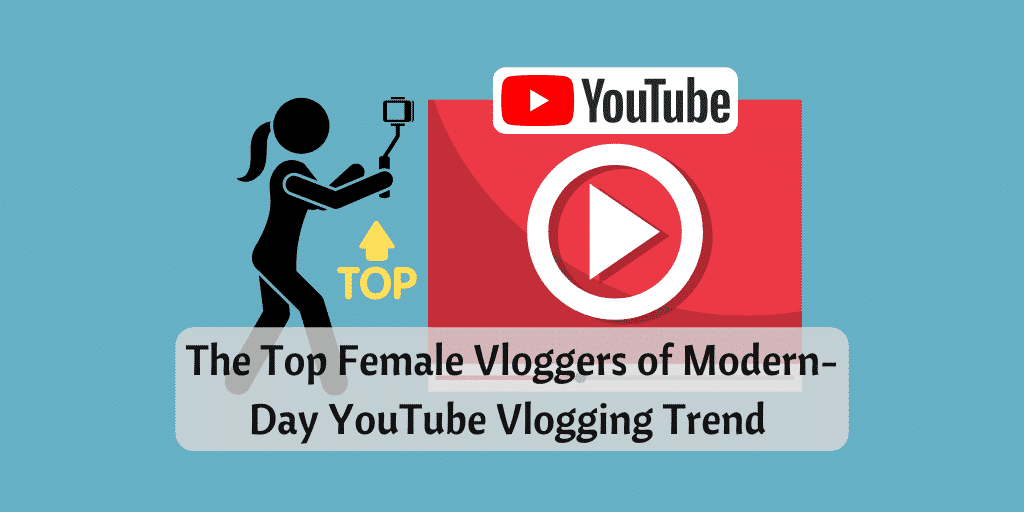 YouTube has seen massive user growth ever since its launch, and the latest development has been the rapid increase in the number of female vloggers using the platform to reach out to the masses. The platform has given fame to so many creators and thinkers.

We will make you meet some of the amazing and extremely popular women YouTubers who made a name for themselves with their positivity.

What has been the contribution of female vloggers to YouTube?
Top 10 Women YouTubers in lifestyle development
Top 10 Tech Female Vloggers

What has been the contribution of female vloggers to YouTube?

Vlogging has been a recent trend that attained massive popularity in no time. The content from the vloggers covers everything under the sun and is very enriching in most cases.

Statistics show that 38% of users of YouTube are ladies; however, there has been a considerable rise in the number of women YouTubers who posted amazing videos and gathered millions of subscribers very soon.

The women Vloggers have been posting a variety of videos that spanned many fields like:

Let’s familiarize you with some marvelous female vloggers from all fields.

The first video of Jenna that she rolled out in 2010 gained an amazing viewer base of 5.3 million people in just one week. That decided her fate and made her comedy one of the signature styles in the YouTube world.

Her channel is one of the most popular ones run by a woman, and her social media fame also got her a place in the Madam Tussauds museum.

Besides, here are the most successful girl YouTubers for your reference.

From starting on YouTube in 2013 and then interviewing Barack Obama, this extremely charming YouTuber gathered high popularity in a very short period.

She has a sense of humor that stands out among the female vloggers and has managed to get her a huge fan base of 15 million. Liza is also venturing into acting, and her new series is on YouTube.

On her channel RCLBeauty101, Rachel makes sure to keep variety intact by putting up videos of different genres like comedy, beauty, DIYs, and challenges. Starting in 2010, she has managed to get likes amounting to nearly 220 million.

Her videos on fashion and beauty have brought her a mention in the big celeb magazines like Forbes and Cosmopolitan. This 23-year-old is already a beauty and a big-time influencer that will stay for a long.

She is a Superwoman, just like the name of her channel, as Lily Singh acts, sings, writes, and is a philanthropist too. Her vlogs channel has a huge subscriber base of 2.2 million.

She is known to have made so many collaborations with popular stars like Selena Gomez, Seth Rogen, Steve Aoki, and James Franco.

She has also appeared in shows on popular TV channels like HBO due to her successful acting career. The cherry on the cake- Lily is the 10th highest paid YouTuber per the Forbes list.

She started blogging in 2009 and then continued to build a YouTube channel owing to the success she tasted with her blogs.

Zoe has various videos on her channel that pertain to beauty, fashion, challenges, and lifestyle. She also wrote a book called Girl Online which was a record bestseller for a week.

She has also won so many awards in the category of female vloggers like the Teen Choice Award, Nickelodeon Kids’ Choice award, Cosmopolitan Blog award, etc.

With the Wengie Music channel and the Wengie vlogs, this superstar YouTuber makes beauty, fashion, DIY, and prank videos.

Her first track was released on YouTube in China with the title Baby, Believe Me, followed by Oh I Do, which did amazingly well on the platform. Huang is a voice actress and has given voices to the Power Puff Girls in their New Zealand and Australian versions of the show.

With over 11 million subscribers, her YouTube channel is highly loved in Australia for its beauty, fashion, DIY, and prank videos. She started in 2009 and has been making fashion videos, mostly where she would sprinkle around tips on styling and clothing for different events.

She collaborated with Aeropostale to launch her accessories, perfume, and clothing line, which got major success. Bethany has also appeared on dance shows, and her singles have received much love from the audience and critics.

This woman YouTuber is a well-known Violinist in the world who has come down to becoming one of the biggest influencers among female vloggers after starting in 2007. Her channel has everything related to music and collaborations with many popular artists.

The creator of 4 studio albums, Lindsey is a pioneer in rock, pop, electronic, and classical music. She has won awards from Shorty, YouTube, and Billboard Music and is one of the brightest stars on the rise.

Pansino aimed to improve at acting, inspiring her to start a YouTube channel. Eight years later, she has become one of the best food vloggers and authored the reputed series Nerdy Nummies which has won her many awards.

She does baking on her show and focuses on preparing unique nerd-themed food. Many celebs appeared on her show, and her channel has around 10 million subscribers.

Her channel, Miranda Sings, has Colleen playing the role of the character named Miranda, who poses as singers and musicians and does a satirical act on them. She aims to get her videos recognized by famous record companies.

Her singing talent is unique and has become almost a cult with millions of followers. She is also the lead role in the Netflix series Haters Back Off.

Her YouTube channel has been active since 2006, and she has posted highly useful videos on information about cyber hacks and related tips. Her most recent venture includes Vlog University, where she gives lessons on tech vlogging.

She champions social media, influencing and promoting women’s participation in tech development and giving voice to their passions on social media.

Her channel named Geek Curl Diaries has over 25k subscribers, and Carrie has also authored a book on computer science called Raspberry PI for Teenagers. Her videos contain topics like computer science, electronics, and programming.

She strives to promote enthusiasm for tech amongst young women and make it easily accessible to them to enable easy learning and involvement.

This woman YouTuber has a channel named Coding Blonde, where she has already posted more than 100 videos about topics like a historical representation of women in the tech field and interviews of successful women in software development. She creates content, is educated, and is an entrepreneur too.

Masha has worked with Google and thus shares her experiences to educate women about coding and related skills. She has built a female vloggers community on her channel regarding this and promotes the members to learn and share knowledge.

The woman behind this channel successfully created an appeal amongst young women by driving them to tech careers. She also tends advice to women seeking to re-build careers in the tech field, switch careers, or want experience.

This tech vlogger is proficient in computer science and makes programming tutorials that are very engaging for her audiences. Estefannie strives to make programming easy for all along with entertaining.

She also specializes in content analysis algorithms and works on simplifying complex ideas for learners. Her strong fan base, compared to the other female vloggers, demonstrates how much people like her work and how able she is to bring people together.

She has designed the YouTube channel NothingButTech to familiarize people with tech gadgets. Not only that, but she also makes videos on tutoring people about the role of tech in improving general lifestyle, vlogs about her work and daily life, and reviews of the latest tech products for the common consumers.

Jacklyn is also a public speaker who gives lessons on vlogs and social media. She has worked with Apple and Samsung and continues to be a tech role model.

Earlier, a model, Tiff ventured into FullStack development and went on to make a YouTube channel to teach people about the same.

She makes videos on various topics like tech reaching, coding, and acing tech interviews, along with other motivational videos on issues like imposter syndrome, work from home, failure acceptance, and preventing burnouts.

Her conversational tone promotes engagement with her audience through FAQs and comments.

On her channel Girl Knows Tech, Marie aims to break the barriers related to female vloggers in tech. She makes educational vlogs, where she also documents her study experiences as a woman pursuing software engineering.

The subscribers can gain valuable insights on any aspect of tech subjects. She also answers the various questions of women about what studying tech looks like and tries to make it easier for everyone.

Her videos are sometimes as long as 7 hours and include unedited talks on the efforts that are made to be qualified for taking up tech as a profession.

Her channel BlondieBytes has set an example of a woman making efforts to simplify and make coding and computer programming accessible to everyone.

She makes weekly uploads to the channel and talks about coding methods in different computer languages like Java. Thousands of her subscribers have liked the videos, and she is also an inspiration to the female tech vlogging community.

She promotes women’s empowerment in the tech field.

The woman who owns this channel has seen huge success for her attempts at making available diverse content and tech education to everyone.

The channel has continued to be consistent in delivering consumerist content and makes very relatable videos.

These female vloggers have become an inspiration to women across the globe and have been adding products to the functioning of YouTube.

Their work is being liked for different reasons as they appeal to the viewer’s mindset and are highly appreciated by the critics.

Their subscriber base is proof of their achievement, and there are many others on the rise whom we wish to mention later.

Spotfire vs. Tableau – Comprehensive Comparison of 2022