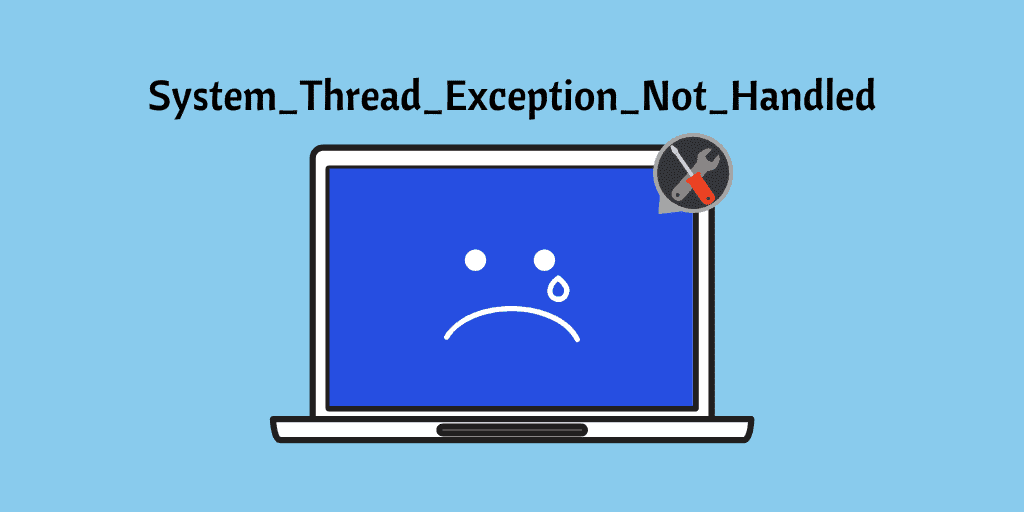 While using Windows, some of you might have come across a situation when your system’s screen went all blue and dysfunctional with a message saying that system_thread_exception_not_handled.

This kind of problem usually occurs randomly or when the system boots up during the upgrading or set up times. This stop error happens due to many reasons and can be solved easily too.

Generally, you have to wait until the system collects some information, and then the PC reboots itself to solve the problem.

However, if it doesn’t, this article will prove to be of great help where we will be telling you ways to resolve this System_Thread_Exception_Not_Handled issue if it happens on your Windows 10 computer. So let’s get started.

Why does the issue of system_thread_exception_not_handled happen?

One of the main common reasons is BIOS incompatibilities. The System_Thread_Exception_Not_Handled issue can also be caused by a driver like nvlddmkm.sys, Netwtw04.sys, and iaisp64 sys.

Sometimes when you boot the computer, the screen flickers and turns blue. The system then enters into a loop of reboots, where it keeps on rebooting repeatedly.

When the system_thread_exception_not_handled error happens in Windows 10, it is mostly the graphic drivers to be blamed. They are either the old ones, get corrupted or incompatible. Thus several parts of them become unrecognizable by Windows.

Due to this confusion where it recognizes some parts and not the others, the error is caused. However, if you think it’s a big problem, it’s not true as it can be resolved by the simple methods we will be telling you.

PS: click here to figure out how to fix the Whea Uncorrectable Error.

How can the issue of system_thread_exception_not_handled be solved?

Since the reason for the problem is many, we will be dealing with them one by one. As we all discussed, the major reason is the malfunctioning of the drivers.

Before starting the process, you need to check if there is enough disk space on your computer. If space is not enough, then use any tool to delete the junk files, which would clear up some space on the disk. The disk cleanup tool can be one such help that you can use.

Sometimes, the message that appears on the blue screen also contains the file’s name that caused the error. It can be something like system_thread_exception_not_handled (nvlddmkm.sys). The name written in the bracket is the name of that mischievous file, which means that it is the graphic driver called NVIDIA.

In this case, where the error displays the file’s name to you, you begin the troubleshooting right, targeting the particular file only.

The main idea is that once you see the file’s name in the bug check message, you start with finding out the nature of the file. You need to find out the location of the file on the computer. Then, check its properties or search about the file on the web if the system doesn’t revert any information about it.

As we know the reason now, it is obvious that you need to start treating the driver file. You may try disabling the driver or checking with the manufacturer for updates for the driver according to the situation.

You can search for yourself if there are any updates for the driver. If you find out that any new service was added in the form of the file, then you may try disabling it with the help of services.msc and see if that works out for you.

How to stop the reboot cycle?

One very effective way is by interrupting the reboot cycle and booting the system into Safe mode. You need to follow these steps to make this happen:

You must always note these steps as they will always help you set up the Safe mode. This mode will be crucial for setting up as all the operations will be done within it. You can use this method always in the future if any such problem occurs again.

Besides, here are the top solutions for the issue IRQL_NOT_LESS_OR_EQUAL WINDOWS 10.

How to update the drivers to solve the issue of system_thread_exception_not_handled?

We know that when dealing with faulty drivers in the Windows desktop, we should update them to solve the major issue.

When the error message shows the driver’s name that caused the System_Thread_Exception_Not_Handled issue, you should start updating it first.

However, later you may find out that the entire matter wasn’t just about that one driver. And there was more wrong than just the graphics. The process we will tell you now aims to update all the existing drivers on the system you are operating.

Below are the steps to do so:

When the blue screen appears at the start-up time, you should try rebooting the Windows in safe mode or remove the malfunctioning driver. If the driver is a part of the start-up, the setting of the system in safe mode, then use the Recovery console to restart the computer.

You may also try changing the video adapters or getting the latest updated version of Adobe Flash player. If the system has BIOS memory enabled, then disable it. You can also check for BIOS updates if there are any with the hardware vendor.

If you face the audio service is not running, click to fix it now.

This article dealt with all the possible reasons that caused the system_thread_exception_not_handled problem in your Windows system.

We told you the best fixes for it too. So if you’re facing such an issue, find out the reason and diagnose it with the method meant for it.

How to Fix Android Auto’s Communication Error 8 With Ease

Why Is My Internet So Slow All Of A Sudden – Fix It Now!

How to Fix Outlook Keeps Crashing Issue With Ease?