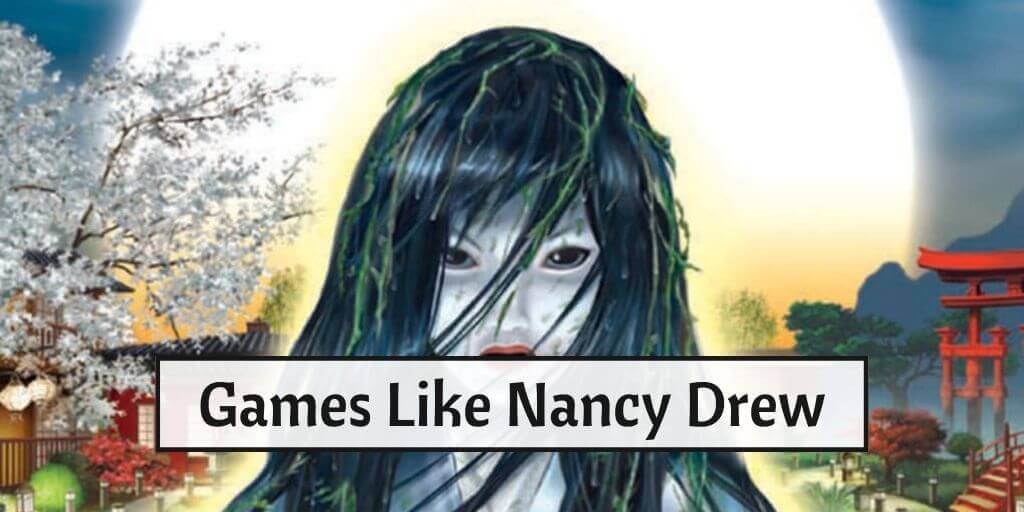 Playing games like Nancy Drew is an amazing experience for many gaming enthusiasts. However, some individuals will struggle to find games similar to Nancy Drew. This is particularly true because of the availability of many games.

There is no shortage of fans gathered around the games that fall into the detective or mystery genre. Most of those games come with a point-and-click perspective, however.

That said, games like Nancy Drew will give you an enormous amount of fun and excitement. It is filled with mystery and so thrilling elements to keep you engaged and hooked all the time. You won’t feel bored right until the end.

As per this game, players are supposed to play the role of Nancy Drew, who was a famous detective. In addition, the players should use a wide array of skills and strategies to find clues.

Then, those clues should be used to decode the respective cases and uncover those mysterious plots. You can make things more interesting by teaming up with prospective partners.

Then, you can interact with multiple characters when you hunt for answers. However, it would help if you did everything against the clock.

Are you a fan of all those editions and played every one of these games? Are you attracted to the games introduced by “Her Interactive” (the developer of Nancy Drew)?

You can read this article and find other games similar to Nancy Drew. We assure you that all those games will keep you engaged and entertained with thrill and excitement.

This is one of the best games like Nancy Drew, based on another popular detective series. You can see that the respective game is adapted from a book by Agatha Christie.

The name of that book is “Death on the Nile.” The fictional creation done by Agatha Christie is developed into a superb mystery-solving game.

As per this game, you will be able to play the role of an investigator of murder and crime. You will see some surprising killings when you play as a renowned crime-solver. Those killings take place in an enclosed space on a cruise ship. You, as the detective, should be able to investigate those suspicious individuals and unearth the truth.

Players will be able to reach the rooms where suspected individuals gather. So, as a detective, you should find clues and other evidence to frame them. You will also have to spy on those individuals to gather more information. Once the materials are gathered, you will move forward and find the culprit.

This game comes with a superb investigation process as well. It also has a very rich storyline. Also, it directs you in many ways to go to a conclusion. It is highly rewarding and enjoyable for any user. So, we have enough and more reasons to rate it as one of the best games like Nancy Drew.

Myst is another superb game that falls into mystery and adventure. Players can take the role of the investigator as per the gameplay. The investigator is employed to solve a pretty complicated mystery on a strange island.

The name of this unknown island is Myst. That’s the name of this game as well. You will be on that island right after reading a book, and things have been shocking since then.

Once the story has begun, you will solve various puzzles on the island. You will solve all those mysteries and uncover the truth as the detective.

As per the gameplay, you will start with the intention of finding and freeing two brothers. Those brothers are captivated by this strange island called Myst. You will have to release them as the ultimate goal.

You can find plenty of mysterious things in this game. And you will also see some thrilling experiences when you explore the island. You can solve those puzzles and gather plenty of clues and reach two brothers.

In addition to that, you will have to do it before the time runs out. There will be plenty of mysterious messages to read and find strange clues as well. These characters make it one of the best games like Nancy Drew, for gaming enthusiasts.

As you can easily guess, this game is based on the well-known, legendary detective called Sherlock Holmes. We had no hesitation in placing this game at the top of this list.

We consider it one of the best games like Nancy Drew because of its excellent characteristics. It works as a crime-solving game that Legacy Interactive develops. The legendary detective is on a quest to solve those exciting crimes and uncover the truth.

As per the gameplay, you are supposed to play the role of Sherlock Holmes. It is similar to the game Nancy Drew in many ways. You will be given many crime scenes to solve. There will be various clues to solve the case at hand.

If you have not played this game, it may sound pretty complex. Nevertheless, the good news is that you are provided with some powerful hints to overcome that difficulty. As a result, no player will get stuck in the middle of the game.

Like the renowned detective series worked in those mesmerizing stories, the game also has some attractive characteristics. The player, for instance, should have some important skills in terms of observation.

The players are supposed to use the magnifying glass (which is used by Sherlock Holmes) in the game. That becomes exceptionally helpful to find the hidden objects and proceed.

You can then put those pieces together and find the truth about the criminals. You can even download the demo so you can test your skills.

As a result, you can progress through the infamous cases handled by Sherlock Holmes. This is one of the most entertaining games like Nancy Drew that can keep you engaged.

Syberia II is a sequel to the well-known puzzle game called Syberia. This game comes in the form of a mystery solver for those who love games similar to Nancy Drew.

As per the original title of this game, you will play as a lawyer who is also an adventurer. The name of this character is Kate Walker. You are supposed to follow a pretty dangerous path and intend to find a rare mammoth species.

This game’s backdrops are unique, and they feature the graphics of a frozen Siberia. The main hero of the game (you) will experience constant dangers in this world. You will have to follow Hans Voralberg, your companion.

He will take you on a fantastic journey. There are plenty of obstacles to face. As a player, you should have plenty of courage to face those obstacles and achieve the final goal. So, those who love games similar to Nancy Drew will find this a fantastic option.

Gray Matter is another superb addition to this list of games like Nancy Drew, for your information. With Gray Matter, you must follow a strange tale of a street magician.

This magician has turned into a detective, and he meets a peculiar professor from Oxford. They find themselves in a pretty weird situation where you find plenty of secrets and lies.

Your character in this game is Samantha. As per the game, you should start as an assistant to the recluse professor. His name is Dr. Style.

He faces strange and tragic instances, forcing him to quit his profession. He also has some strange plans to shut the world out and experiment with the human mind.

You can find several exciting elements associated with science and supernatural aspects in this game. The players are supposed to find the truth behind the experiments carried out by Dr. Style. They should learn more about the nature of reality and how powerful the human mind is.

Gray Matter offers a pretty immersive experience for enthusiasts who like games similar to Nancy Drew. One of the most beautiful things about this game is its extraordinary story, providing plenty of excitement. In addition to that, you will be happy to see those stunning visuals and narratives.

So, those are the best games similar to Nancy Drew we can find today. If you love these games, please leave us a comment below. Good luck!

Best PC for Gaming and Streaming in 2022