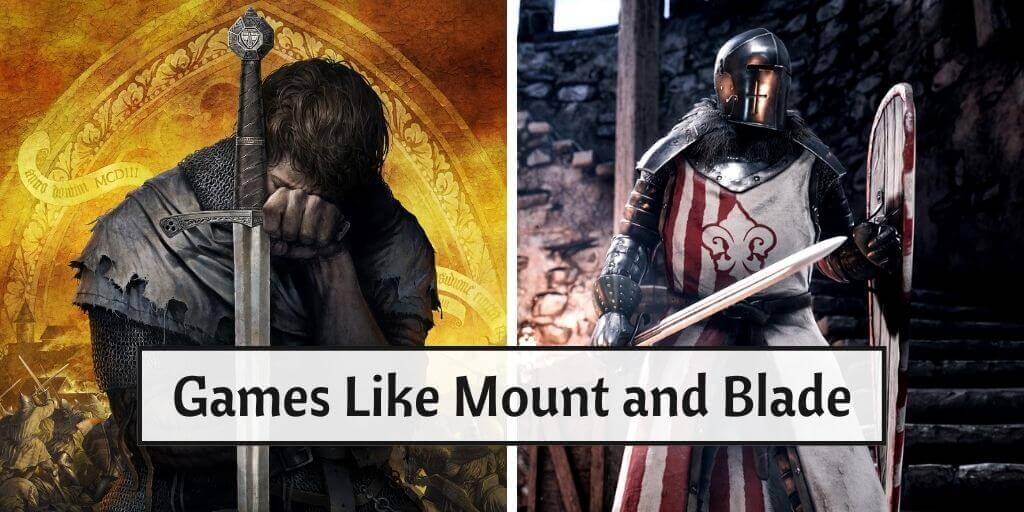 Do you love playing Mount and Blade? If yes, this article is certainly for you as we have listed 13 games similar to Mount and Blade that you will enjoy playing.

Developed by Tales World Entertainment, Mount and Blade is an action role-playing game that consists of historical mayhem and strategic gameplay. It is a sandbox game that involves you in epic medieval European, Asian, and African battles.

The storylines of Mount and Blade are inspired by the medieval age of wars. This game gained many fan following and appreciation due to its dynamic gameplay, real-time strategy base, massive open-world concept, and nonlinear characters.

With Fire and Sword was based on a stand-alone spin-off expansion released in 2011. Recently a sequel, Mount & Blade II: Bannerlord, came out on Steam in early access in March 2020.

If you have played all these installments and want to try other such games, you have arrived at the right place. There are numerous games in the RPG genre, but only a few have mastered the essence of Mount and Blade. We have included various games in this list to meet every RPG player’s interest.

The gameplay of Life is Feudal: Your Own is similar to Mount and Blade, particularly Mount & Blade II Bannerland. The storyline is inspired by the medieval age war, and so are the location and cities.

And the environment setup, combat style, open-world concept, and other game-style features are similar to Mount and Blade.

Although its theme is from Mount and Blade, Life is Feudal: Your Own has a unique playthrough. For example, you will get your hands on building structures, digging tunnels, and crafting items in this game. It is one of the popular Mount and Blade-type games.

PS: here is the full God of War for Android review for your reference.

Blade and Sorcery is the MMORPG first-person open-world game that is the only-VR game but possesses similar gameplay to Mount and Blade. It focuses more on combat and thus offers you heavy medieval weapons, artilleries, and other hand-to-hand armaments, adding excitement to the game.

Furthermore, Blade and Sorcery put you in a sorcerer’s shoes, allowing you to use supernatural powers against your enemies. Even though the theme and game style is similar to other Mount and Blade-type games, it maintains its uniqueness with its new features and mechanism.

The historical plot, VR simulation, combat style, weapons, and a Midas touch of fantasy make it one of the best games like Mount and Blade.

The story of Kingdom Come Deliverance is different from Mount and Blade-type games. Unlike other games similar to Mount and Blade, its story is based on a young boy named Henry out on vengeance against the invaders that slaughtered his parents.

The environment setup is similar to that of Mount and Blade-type games. This game will take you to the middle European era, and you must blend in with the culture and livelihood of that period.

You will come across the renowned fighters of medieval Europe who display the real-time strategy-based concept. Furthermore, your victory and defeat are solely dependent on the decisions you make as you forge ahead in the game.

The War of Rights plot differs from the games mentioned above, like Mount and Blade in this list. The story is historical but not based on the medieval age; it displays the siege American Civil War. However, the combat style is inspired by another era which makes it similar to Mount and Blade-type games.

Plus, character interaction, real-time tactics, and visuals are quiet to Mount and Blade. If you want to experience a dire situation filled with intense combat and a high level of strategic gameplay, then you must try the multiplayer option in this game.

The open-world feature lets you explore the world and allows you to fight against the AI army of enemies in an epic battle.

Furthermore, you can customize its character and location and fight against flying soldiers, mammoths, and many more. These features mold the Totally Accurate Battle Simulator into more fun and action-adventure game.

Chivalry Medival Warfare will remind you of the Age of Chivalry and Mount and Blade, as its features and gameplay are similar. You will embody the soldier who must fight against other nations.

As the story revolves around the medieval European era, the equipment and game style are designed to complement the same.

Furthermore, it is a multiplayer game, and 32 players can participate in a single playthrough. There are 60 different kinds of weapons collections in this game.

Chivalry Medieval Warf includes back-to-back action-packed playthroughs, making it one of the best real-time RPG games like Mount and Blade.

MORDHAU will give you a first and third-person gameplay experience and allow you to enjoy the intense battle arena where you will not be tired of massacring the rival army with lethal weapons. The combat style resembles Mount and Blade-type games.

Moreover, you can choose the intensity of the gameplay by selecting between small-scale battles and online multiplayer game formats where almost 80 players take part worldwide.

Nevertheless, online battles allow you to test your skills and abilities by fighting against different players. Without a doubt, MORDHAU is one of the most brutal games in this list of games like Mount and Blade.

All the Total War series games display the saga of medieval Europe, Asia, and a few parts of Africa. Similar to other games like Mount and Blade, the theme and site are inspired by the middle era when nations fought for their land and religion.

If you are seeking a perfect medieval history and gameplay, then Total War Medieval II will be the best choice.

You must strategize your move before hitting the battlefield to conquer the other 17 groups with the same mission as yours. Although this game becomes exciting when you play in real-time multiplayer mode, you can opt out of the game if you don’t want to get involved in dire situations and intense gameplay.

One of the most popular RPG games like Mount and Blade, which came out in the 2000s, is a boon to players. It contains impressive RPG-level characteristics that will increase your desire to try this game.

It includes supernatural powers, astonishing visuals, and weapons that escalate the level of this game and make it more fun.

Furthermore, you need to build your houses and manage the essentials like weapons, damage upgrades, and many other things in this game. It allows you to explore the virtual world and become accustomed to the environment’s beauty.

Although the Elder Scrolls V Skyrim includes some fantasy-inspired features, it focuses more on weapons and horseback skills. In the character of Skyrim, you will wander around the magical world on horseback and eliminate the monsters.

Gloria Victis is an MMO action role-playing multiplayer game that is among the best games like Mount and Blade.

It comprises a medieval period plot, epic combat, an open-world system, dynamic characters, and amazing visuals. In short, this game has everything that Mount and Blade fans seek in RPG genre games.

To your surprise, the developers of this game have mentioned Mount and Blade as their inspiration. The battle for reclaiming the nation, duel combats, and destructive scenes await you in Gloria Victis. Its amazing features and game style have brought it into the list of games like Mount and Blade.

The plot of Knights of Honor is based on a king who wants to expand his land to become the most powerful emperor in the world.

To execute this mission, you must create an army and recruit the best knights to fight for your cause. Use your knights and manage your troops to win the battle against other nations.

Like other Mount and Blade-type games, Knights of Honor will take you centuries back in the medieval period, which holds the beauty of the historical location, medieval weapons, and combat style.

Plan your strategies, and maintain the momentum of victories against the rival armies to become the most powerful emperor of the state.

Middle-earth Shadow of War is an amazing RPG multiplayer game that lets you experience the battle in myth, where you must defeat your foes to win the mission.

One of the two main characters in this game, Talion, has the power to recruit Ologs and Uruks to build an army.

The plot of this game is inspired by the Lord of the Rings, which will take you on an adventure in a mysterious and dark world where you need to defeat the powerful fighters of Sauron’s forces.

Moreover, you can enjoy it online and conquer other players’ nations by allying with its rival nations.

Build your army, plan a strategy, and take down other factions to become the powerful emperor of the world. It is indeed one of the best Mount and Blade-type games you will thoroughly enjoy.

Created by Ubisoft, For Honor is undoubtedly the best game that this company has created in the open-world mechanism. Although the game design supports a single-player game mode, the multiplayer game format adds a new experience by introducing new features.

Test the abilities and skills of different characters like Samurai, Wu Lins, Knights, and Vikings and analyze the strongest character among them.

For Honor offers you the experience of an overwhelming combat style and dynamic characters. These features have made this game one of the best Mount and Blade-type games. You must try this game and indulge in some epic multiplayer battles.

In conclusion, these games are the best alternatives for Mount and Blade and make you feel exhilarated. We have picked the 13 finest games similar to Mount and Blade, adding various RPG games to your list.

Therefore, try these best games like Mount and Blade and experience the medieval era combats differently.