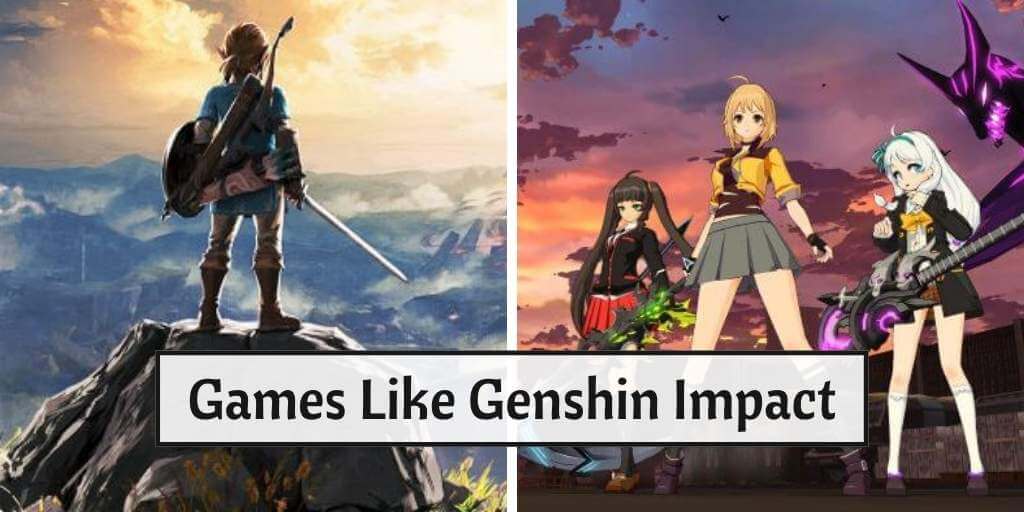 A lot of people look for games like Genshin Impact as they can’t get enough of the thrill.

This preference of the gamers was caught by developers long back, and they came up with plenty of games similar to Genshin Impact.

To make the search easier for you, we are presenting the top 30 Genshin Impact similar games.

About the Game Genshin Impact

Genshin Impact struck the gaming world like lightning upon its release. It showed the whole world what exact quality they can get for free.

The game has an interesting in-game storyline with tons of side quests being a bonus tag. It brought out the open-world adventure of The Legend of Zelda: Breath of the Wild with an utterly interesting plot.

You can enjoy the game on almost every system, whether it’s mobile, PC, or PS4, and none of it will trouble your wallet. The game is free unless there’s an urge inside you that wishes to boost up your adventure.

PS: here are the most popular horror ps2 games for your reference.

To help you with Genshin Impact burnout, we have listed 30 games that have the same feels but on a different level.

Albion Online is an MMORPG, a subgenre of Genshin Impact. It is played in an isometric top-view condition, keeping the classless fighting a priority.

The game allows the players to tap between differently built player types. The generous strategy theme of the game makes it worthwhile.

2. Another Eden: The Cat Beyond Time and Space

This game is a turn-based classic which is mixed with combat mechanics and time travel elements. Surprisingly, there are no timers or energy bars to hold you back.

There is no swapping between characters. Instead, it keeps you tangled with stylish and intriguing moments of the plot.

Azure Lane is another of the gacha games similar to Genshin Impact. It is a side-scrolling girl-based game that has RPG elements included.

The game is created for both Android and iOS users. To survive, players have to upgrade their ships and team and also unlock new levels.

This was one of the best transitions of the famous anime manga, Bleach. The game has over 40 million users.

It has a higher number of characters than any of the games similar to Genshin Impact. It has a crispy storyline, combining the elements of fighting and RPG.

Closers were one of the 3D games with side-scrolling action RPG scenery. It gets more interesting with co-op-style gameplay and an episodic storyline.

Characters are pulled off against inter-dimensional monsters, which makes them unique. The game ought to provide a refreshing change in the gameplay.

After a decade, finally, console users can enjoy the feel of an old classic that holds a separate completely. Cross Code is set in an MMO world. The game is challenging yet provides an immense gameplay experience. It presents many exploration chances for gamers.

Date a Live is monstrous multimedia work. The game was released back in 2020, compatible with both Android and IOS devices.

It prehold that romantic element that games like Genshin Impact are practically missing. The game has both the dating and battle side, which progresses along with the storyline.

Disgaea RPG is one of the latest games similar to Genshin Impact. Presently, the game is only allowing android downloads.

It’s a free and open-world RPG game with stylish characters. The game also has several various in-game modes, with a storyline that keeps you interested.

This is a simple yet crisp game. It was developed by Cygames and later released by Nintendo. The game generated $16 million of revenue in the first two weeks only.

Collaborating with top-tier IPs like Monster Hunter and Fire Emblem, this game has a surprisingly polished plot.

This game holds one of the most action-packed scenarios. You get to rampage different cities, upgrade weapons, and crush slimes with your gang.

The plot also delivers a retro outlook for players who enjoy sci-fi games. This game will keep your heart racing, making you spend hours fighting the quest.

The game started with a dull plot but soon revamped its whole status by adding. Final Fantasy XIV is meant for both multiplayer and JRPGs lovers alike.

Its latest model, Shadowbringers, greatly enhances the appeal of the game by bringing in more lore elements.

This game is the most recent addition to the old franchise of Fire Emblem. With an extra set of character types, it gets more tactical and fun.

The recent update allows the players to create their story plots. Its mechanical upgrades with the extra role-playing make it similar to Genshin Impact.

This game is a futuristic version of games similar to Genshin Impact. It was also made by the same developers, holding its own huge gacha.

Honkai Impact 3 is a fast-paced game with a more compact storyline. Other than Genshin Impact, the in-game combat is similar to shounen-action anime.

The in-game story of Hyper Light Drifter is presented very soulfully. There’s a lot of inferred lore, mythological parts, and backstory, making it quite interesting.

You will also find tons of hidden paths in the game. This game is very appealing for the players who like the mystery unlocking settings a lot.

This game was inspired by Greek legends and myths. The in-game storyline is fantastic. You can roam freely without worrying about the gacha mechanics.

King’s Raid challenges you with different parts of the storyline. The game has various things which are a little hard to get hold of but worthwhile.

Many hurdles are created as per practical factors. It is an incredibly competitive game.

Kurtzpel holds a different ground than any game similar to Genshin Impact. The game includes PVP or co-op battles, which are either between players or A.I.

It has various modes similar to Battlefield or Call of duty. The pleasant fun of Deathmatch and stealing the flags is addictive.

This game includes various characters, starting from wolverine to iron man. It’s surprisingly strategic, with 75 playable characters on the list.

Even if you’re a marvel lover, it also comes under the list of similar games like Genshin Impact successfully. Thus, you get the feel of both anime and marvel in one game.

It’s a very surprising yet unique gameplay. The main character is a shopkeeper in the daytime and gets transformed into a knight by night.

It’s a slash, heck, and sell game providing a new 2D experience. It’s a wonderful game to set back after playing games similar to Genshin Impact.

This game holds one of the most adorable yet challenging aspects of the plot. Ni No Kuni 2 is similar to the system of Pokemon.

It allows you to catch the monsters, which are then used in the in-game battles. The game also comes with a chibi-style fighting system.

The Personal series has massive popularity over any other series. This game held everything from the previous games and kicked the excitement higher.

The highly polished in-game combat style gives a boost from the start itself. The additional social interaction within the game makes it quite entertaining as well.

This game can give you a much-needed break from games similar to Genshin Impact. Although Phantasy Star Online 2 is an MMORPG like Albion Online, it still offers tremendous gameplay. This game was a sci-fi success, including a lot of mechanized characters and cyborgs.

The old art combination fooled tons of players in the start, which, after a while, fell off its charm.

This game was specifically produced for April fools day, giving a wholesome pack of humorous gameplay. It is a free-to-play game for anyone who wishes to relax after spending hours of challenging games.

This game provides a turn-based fighting system. It allows the players to use their favorite character, which is unlocked.

The PC version was released in late 2020. It has a dark in-game storyline, filled with twists and turns. This is one of the closest games similar to Genshin Impact.

Rumble Road was a free-to-play web browser RPG. Its convenience to play on mobile devices makes it similar to Genshin Impact principles.

It is designed by Sean S. Leblanc. If you enjoy playing a game that’s simple yet challenging, you’ll like it.

Soulworker is one of the anime fighting games similar to Genshin Impact. It is also an MMORPG like Albion Online with an intensive system of choosing a specific player type.

The in-game skin is aesthetically beautiful. However, it does not hold any gacha system for its characters.

The Alchemist Code is a turn-based strategy RPG game. It’s designed pretty well for a combat-style game. The menus are filled with weapons and upgrades, which you keep on getting with every task.

However, its lowkey title provides a reminder to gamers about the capabilities of phone gamers.

28. The Legend of Zelda: Breath of the Wild

Things get simpler in this game as it is a single character-focused play. The in-game mechanics of this game inspired Genshin Impact the most.

You can use elementary attacks similar to Genshin Impact to knock off your opponent. Being an old game, this game still holds Nintendo magic.

Whether it’s the Netflix series or stories from old gamers, 3rd person RPGs only get furiously fantastic with The Witcher 3.

The Witcher 3 is full of challenging combat with jaw-dropping graphics. Being a mutant who hunts down monsters, The Witcher 3 has never let his player down.

This game has kept on going since 2020 and still holds a strong, active base. Even after being an old game, the in-game graphics are classic with mind-blowing action scenes. Vindictus is a very important MMORPG, serving as a pioneer for its action gameplay.

So, above were the 30 best Genshin Impact similar games, which are not going off the market anytime soon. All of them have received overwhelmingly positive responses from gamers.

We hope that you will enjoy them too. If you know more about such games, tell us in the comment section below.

Best Video Game Console for Kids You Must Check Out

Best Roblox Games & Keep Kids Away From Them