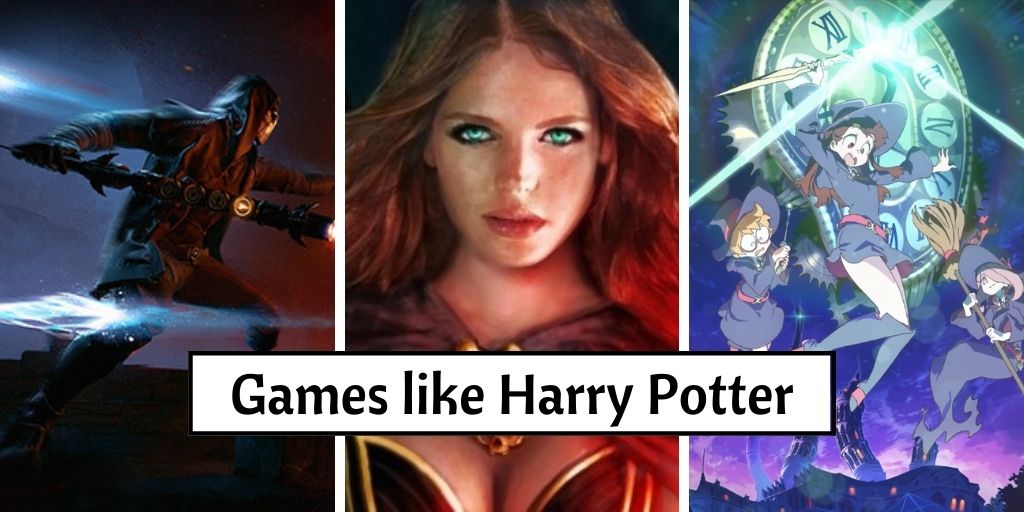 Those who prefer playing games like Harry Potter will find this article to be highly useful. If you are one of them, keep reading and pick a couple of games to play during your leisure time.

It is true that we still did not see a “Wow piece” of a Harry Potter game. We honestly believe that there is hardly any chance for such a game to come. That means a video game might not be able to represent all those magical dreams, witches, and wizards properly.

There will be some limitations with any video game developed based on Harry Potter novels or movies. So, for the movement, we have to be satisfied with what we see in the market. Finding the perfect games like Harry Potter is not easy.

In that case, we should focus on nearly-perfect games like Harry Potter and enjoy them. Let’s take a look at the list below and pick a couple of games.

We had to do some serious research to find the best games that fit this criterion. We were able to end up with five games that come with some fantastic characteristics. Indeed, they cannot deliver the entire wonders found in the movies and novels.

However, they can deliver at least some of the effects that are unique to the Harry Potter series. So, continue reading and find a couple of games like Harry Potter.

PS: here are the best games like Town of Salem and the top games like The Walking Dead for your reference.

This game is available on PlayStation 4 and Microsoft Windows platforms. This game is developed based on the anime series that comes under the same title.

That means it has the characteristics and storyline related to Little Witch Academia: Chamber of Time. So, if you are a fan of this chapter, this game might have something for you.

Generally speaking, this game falls into the Action Roleplaying Games (RPG) category, which is pretty exciting. Also, the game requires players to engage in the character of Akko.

Well, Akko is a witch who is undergoing training. And she attends the Luna Nova Magic Academy, a well-known, reputed school that trains young witches.

Being the player in Akko’s shoes, you are supposed to explore various areas. For instance, you should explore dungeons. Also, you should cast magical spells. You can even use witchcraft so they will embark on the magical tale.

You can find two distinctive game modes in Little Witch Academia: Chamber Of Time. With its 3D model, you can explore the academy. The 2.5D mode will be more suitable for battles with enemies, including monsters.

So, there are plenty of similarities between Harry Potter & his friends and Akko & her friends. Their magical casts are pretty similar, their approach is similar, and there are various other similarities to find.

Moreover, if you were looking for games like Harry Potter, you shouldn’t miss this out. It surely will make you so excited because of the effects, storyline, and characters.

Are you a fan of a combination of magic and adventure? If yes, this could be one of the ideal games that are developed just for you.

This game is developed for consoles like PlayStation VR, Oculus, and Steam. It is a first-person adventure game based on virtual reality. It lets you take part in epic duels that are played against different online players.

Those who are interested in playing a game like Wands will go through amazing gameplay. You will be given a magic wand in this game. So, you will have to learn various magic spells to succeed in the game.

The combination of those spells and the magic wand you use will make you an incredibly powerful wizard. Then, you should face off against the wizards as well as the witches. If not, you can polish the skills to practice new spells within your secret workshop.

Thanks to the amazing, interesting, and highly competitive gameplay, it will keep you engaged all the time. Also, it shows some massive battle arenas to keep you entertained. You will definitely feel like you are in the middle of a magical world when you play this game.

Do you want to experience some of the magic associated with Harry Potter movies? And do you want to play it right on your iPhone?

Well, if that’s the case, Wizard’s Choice would be a perfect game for you. This is a very interesting game that is developed in the form of a highly interactive world. The universe is a magic-filled one.

Wizard’s Choice is a game that lets you choose your adventure type. It allows you to read the story with a passive experience which is somewhat interesting.

To make things more interesting, you will find plenty of twists and turns in the story. In fact, you will feel that you are playing an RPG.

The players are supposed to keep track of aspects such as mana, health, and gold. That will be required in achieving goals as per the gameplay.

On top of that, you should make choices as the story goes on to different levels. That will impact the way the game ends. Basically, this is one of the most exciting games like Harry Potter.

Spellbreak was a PlayStation 4 exclusive, and later on, they released a PC version for those who are interested. It is available on Nintendo Switch and Xbox one as well.

This game has an interesting combination of magic spells and battle royale concepts to make you pretty excited. This is a brand-new title from Proletariat Inc. that has some amazing characteristics as well.

The initial release of this game took place along with a trailer. When you use the trailer, you can see that there are three wizards and witches. They fly down. They demonstrate more of an à la portkey style.

Then, they realize that they are put into a totally epic magical battle. This battle takes place against opposing witches and wizards.

Basically, this is a third-person game that has a colorful atmosphere with superb effects. Also, it shows some great aesthetics that come with a medieval touch. This shows pretty much everything you loved in those interesting fight scenes, like in the Harry Potter series.

In the beginning, they also released an Alpha version of this game on computers. Finally, they released the game’s original version for Windows a couple of years ago. Now, you can play it on consoles like Nintendo Switch and Xbox One apart from PS.

So, we have enough reasons to put this as one of the best games like Harry Potter.

It is true that Muggles might have adapted Quidditch in the form of a pretty interesting ground sport. However, nothing will be more interesting than flying in the air as you wish using a broomstick. In reality, no one will ever see a flying broomstick.

However, the concept is really amazing, and it is highly popularized in most stories. If those broomsticks were a reality, every one of us would be happy to ride one. With that said, Broomstick League is one of those rare games that lets you ride broomsticks.

Broomstick League gives players their own magical broom with excellent powers. Each player is supposed to compete against teams to score goals and thereby collect points. The points they collect will be the decisive factor in determining the winners of the game. Even if it is a game of Quidditch, that’s not an official name.

If you want cooler features, Broomstick League gives you a wand as well to play. That ensures that you want them to cast some spells against your rivals in the game. With that wand, you can experience some advantage over the other players.

This is true, particularly when you are in the air. Virtual Basement is the developer of this game, and it was published by the company called Blue Isle. They had a beta test as well, and they made it available in March last year.

What are your honest feelings about the above list of games like Harry Potter? Do you want to add more games to this list? Keep us posted; we will update this list based on your suggestions.

Best Video Game Console for Kids You Must Check Out

Top Games to Play While Listening to Music