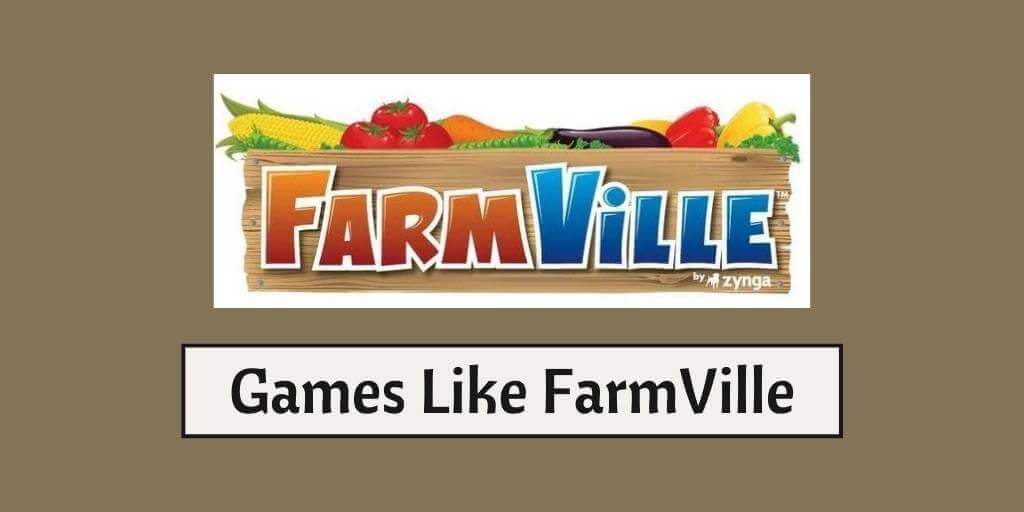 Do you play FarmVille? If you are a fan of FarmVille and love to play social games, then we have brought a list of 8 amazing games similar to FarmVille that you will enjoy playing.

Launched in 2009 on Facebook, FarmVille is the most loved social game till now. This game received huge appreciation from the gaming community after its launch. It was published by Zynga and is an agriculture simulation game.

After its massive popularity, Zynga released more versions of this game. Those who have played FarmVille will love to experience the different activities that these games have to offer. It is difficult to find a player who has played FarmVille and does not love it.

However, there are many agricultural simulation social networking games, and it might be hard to pick the best ones. But, no worries, we have made this easier and picked out some of the best FarmVille type games for you. If you are bored playing FarmVille and want to play other games similar to FarmVille, then read further.

PS: here is the completed guide on the Stardew Valley Most Profitable Crops.

My Sunny Resort is an agricultural simulation social networking game that takes your profession one step further and lets you manage your island resort instead of farming. Your work includes economic management, deploying new staff, building facilities, and maintenance of each hotel room. At the beginning of the game, you will only get a piece of land on an island.

You need to build your resort from scratch and customize it to attract visitors. The gameplay is similar to FarmVille, but instead of making money through farming, you will earn money from building a beautiful resort. This FarmVille type game contains active users and is more active than other games similar to FarmVille.

Unlike other games like FarmVille, My Free Farm is based on in-depth gameplay. The game will indulge you in deeper mechanics that are required during farming. If you want more than just a casual agricultural simulation social networking game, then My Free Farm is for you. The developers have tried to make this game genuine to the agriculture system.

You will get various small plots of land, and each of them will be used for planting varieties of crops. If you want to ace this game, then you have to look at it from a broader perspective. Firstly, you need to travel to the town in order to buy seeds and other materials for farming. Secondly, after sowing the seed, you must take care of the seeds properly by watering them from time to time. Thirdly, prepare your harvesting implements at the time of harvesting.

Furthermore, you need to collect and keep your products at a warehouse in order to sell organic products to customers. You must sell your products, collect money, and invest it in your farming to grow your farming business. Thus, My Free Farm enables you to experience every prospect of farming life. It is indeed one of the best FarmVille type games.

Another one of the popular games similar to FarmVille, Farm Up, is a browser-based farming simulation game that is available for free. You can create your altered virtual self and buy a small plot of land for farming. In this game, you need to plow and cultivate different types of plants. Plus, you are free to customize your land by building and decorating it according to your preference.

This game provides you various options for earning rewards. For example, if you store the crop in a warehouse instead of selling it to customers, then you will earn rewards that will help you to make various strategic options. In addition, you can send gifts to other players and request them for cooperation in your work.

As you advance further and level up in this game, you will be able to unlock different editions like getting a bigger plot of land and various other features. The last installment in this game was updated in December 2012, which adds up to 400 levels. Therefore, there is plenty of gameplay for you to experience the exciting journey of farming. It is undoubtedly one of the best farming simulation games like FarmVille 2.

While Uptasia’s gameplay is somewhat similar to FarmVille, the plot is different. It is an economic simulation fun game to play. It brings a perfect combination of economic aspects and finding a hidden object in mini-games. If you enjoy discovering new things in the FarmVille type game, then Uptasia will suit your taste perfectly.

Plus, if you are bored taking care of your business, then you can play mini-games in which you need to find out the hidden items. The quest for an item has a time limit of 60 seconds. Test your speed and accuracy and enjoy playing these mini-games. Not to mention that this game is one of the addictive FarmVille type games and retains your interest with its exciting playthroughs.

Big Farm is a farming simulation social networking free-to-play game and is one of the best games like FarmVille. Plus, it is a browser-based game that allows you to play online without downloading it. Therefore, you can play this game anytime from anywhere until you have good internet access.

You need to plow the land for farming, sow seed, and grow different types of plants and vegetation.

Moreover, you can also get your hands on cattle farming which includes varieties of cattle like sheep, goats, cows, horses, rabbits, bees, and many more. Along with agriculture products, cattle farming will help you to produce various other products.

Plant varieties of crops, take care of them, harvest them, raise different cattle and use them to produce more products; this game contains every element of farming just like FarmVille. Although the gameplay is the same as other games like FarmVille, the storyline is different. Play this amazing game and experience the lifestyle of farmers away from the city. It is also available on mobile.

Molehill Empire falls in the category of FarmVille type games as the elements of this game are similar to FarmVille. The only difference between FarmVille and Molehill Empire is the size and number of plots of land. Unlike other games like FarmVille, the game style is based on garden simulation than agriculture simulation. You need to grow varieties of plants on a big plot of land.

If you are fond of gardening, then this game will let you experience the fun and joy of growing different species of plants in a bed of one large land. It includes all the elements of gardening like planting varieties of plants, watering them timely, removing wild and unwanted grass-like weeds, removing stones and stumps, involving with nursery, getting greenhouse access, and much more.

Furthermore, the competition is held among the gardens in which a group of garden raters rates the garden of each player. The components of this game are similar to FarmVille, thus making it one of the best games like FarmVille.

My Little Farmies takes place in a village where you will witness farmers, cattle, landfills, and agriculture. As you pass through, you will notice a farmer clothed in a medieval-style who is farming in the field. The setup in this game will give you the feel of the countryside.

Created by Upjers, My Little Farmies is a fun farming simulation free-to-play video game. The graphics of this game are different from other games like FarmVille. Its artistic visuals feel real and authentic, which gives you the feeling that you are actually managing farmland.

Just like FarmVille in this game, you will farm on a small piece of land, and as you progress further, you can expand your land where you would be able to grow varieties of crops, raise animals, and decorate your field.

Plus, you need to manage your finance of Thales and gold bars to manage your land. You need to perform every activity that farmers carry in real life like cropping, harvesting, collecting their agriculture products and selling them to a wholesaler or processing finished products and selling in the market to get a better price. This game incorporates the same elements as that of FarmVille.

Harvest Moon series is a combination of time management and farming simulation, which is similar to games like FarmVille 2. Plus, this game will give you a chance to play different characters, which eventually adds more spice and fun to the game. It is available on all major platforms like PlayStation (1, 2, 3), Nintendo DS, Nintendo 3DS, Nintendo Wii, and Nintendo U.

Most of the games in this series are based on the same storyline with a slight difference. The story starts with a character that has taken over a deserted land and will farm and harvest in order to revive that land. Keep in mind that you will get a limited amount of energy, so you must carefully spend your energy each day on productive work.

You need to manage your daily tasks like planting varieties of crops, harvesting them, selling them in the market, raising cattle, meeting the villagers and building relationships, foraging, and attending festivals.

Plus, you need to take good care of crops and animals so that they won’t die of lack of water and food. Thus, this game requires you to take every necessary step for your proper growth. It is one of the most played FarmVille type games.

These games will give you the same level of excitement and fun as FarmVille. In this article, we’ve collected varieties of agricultural simulation social networking games to match the taste of all FarmVille fans. These are some of the best games like FarmVille 2 you should definitely try.

Here Are Some Games Similar To Monster Hunter 2022

How to Fix If APEX Legends Crashing in Your Computer