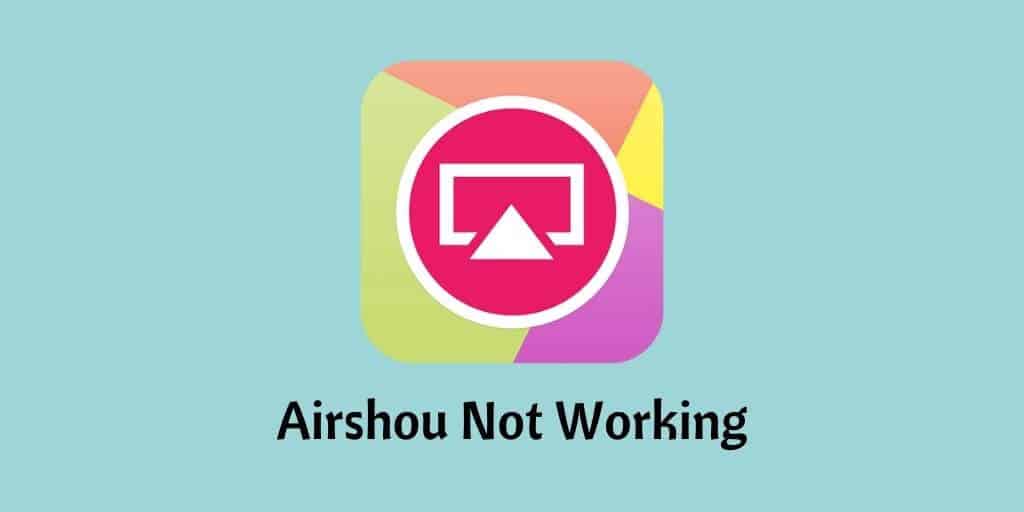 For years we’ve seen Airshou be the dominant screen recording tool for iPhones. Not only is it easy to use but it doesn’t require your iPhone to be jailbroken.

Not everyone is comfortable jailbreaking their iOS device, and if you’re one of them, Airshou is the best iOS screen recorder to use.

But if you’ve been using this tool and all of a sudden Airshou not working, you might be unsure on how to fix it.

Not a problem! We’re here to help you resolve this problem. Whether Airshou keeps crashing or there are connectivity issues, here’s what you need to do.

One problem that you might run into with Airshou is an SSL error. This common problem usually happens when users are downloading the app, rather than while they actually use it, and the following error message will appear:

If you see this connection error, then there’s no way to use Airshou unless you fix it. As scary as the error might look, there are a couple of simple solutions that you can try out.

First, close all of the apps you have open and all open Safari tabs too. To force close your apps just double-click the home button and swipe up on each app individually.

After you’ve done this, wait a few minutes. Go back to Safari and attempt to download Airshou once more. Hopefully Airshou not working won’t be a problem anymore.

Alternatively, if the app still won’t work, do the same thing. Close your Safari tabs (all of them!) and close the apps that are currently running. But instead of just waiting, turn your iPhone off and turn it back on. Now when you attempt to download Airshou, the error should be gone.

Both of these are fairly standard procedures when you have any iPhone issues or for that matter, any type of smartphone/tablet/tech issue. Even just restarting your device can help with a lot of iOS problems so be sure to try doing this!

PS: Here, you will learn more about how to fix Airplay Not Showing easily.

For the most part, anyone trying to record their iPhone will plan on recording tutorials or games, and in the end, they’ll have to jailbreak their iOS device. This is far from ideal, and Airshou is the perfect solution to get over this barrier.

Airshou is compatible with all recent (and most older) iOS devices, but even though it’s very versatile, it’s known to crash on occasion. In this case, you might be experiencing frequent crashes.

Constant crashing is among the top problems that users encounter with Airshou. Faulty installations can cause it, but it’s more likely to be a result of the app’s certificate expiring. What does this mean? Any iOS app developers must receive a distribution certificate from Apple before they can fully release their apps.

There are various types of certificates, but all you need to know is that if a certificate expires and Apple doesn’t issue another, Airshou won’t function properly.

“How Can I Fix Constant Airshou Crashes?”

Believe it or not, if this is what happens when Airshou not working, it’s an easy fix. Just go ahead and reinstall Airshou. Doing this will force the app to retrieve new certificates, and the app should work flawlessly once again.

Now, you might not be able to fix Airshou even after trying these fixes. Given the popularity of this tool, it’s unfortunate that it is no longer available on the iOS App Store.

If you could still download it, then there’s a high chance that the problems above would be gone. Nonetheless, the next step is to find an alternative screen recorder and, in this article, we’re referring to iOS Screen Recorder.

Unlike Airshou, the iOS Screen Recorder solution utilizes your computer. In doing so, it magnifies your iPhone’s display so that you can see it on a bigger screen. Furthermore, while you’re taking advantage of this ability, you can record the screen too.

It doesn’t stop there! Your iPhone can wirelessly connect to iOS Screen Recorder so that you don’t have to have a wire getting in your way the whole time. These are things that you won’t find in any other screen recording solution. The main features of this Snapchat Saver program are:

Even if you don’t have issues with Airshou, we recommend checking this out. iOS Screen Recorder is a fantastic program that you’ll have no issue using.

Steps to Use iOS Screen Recorder

Finding an alternative can be difficult when Airshou not working, but iOS Screen Recorder is the solution that we suggest. As such, here’s a quick guide for you to install and begin using this solution.

Step #1 – First you have to go ahead and download iOS Screen Recorder. Open the file and follow the on-screen instructions to install it properly.

Step #2 – Open the program you just installed and select either “iOS 10 – iOS 12” or “iOS 7 – iOS 9” from the tabs at the top. Since the instructions are different, it’s important to choose the right one.

Step #3 – Take your iPhone and swipe from the bottom upwards to reveal the “Control Centre”. From this menu tap on “Screen Mirroring” and choose the relevant connection.

Note: for best results, you need to have your iPhone and computer connected to the same Wi-Fi network. Otherwise, they may not connect.

Step #4 – After you successfully establish a connection, a blue bar will be shown at the top of your iPhone’s display. The display will also mirror onto your computer and simply click the red circle (record icon) to start recording.

You’ll also see another icon next to the record icon. When you click this, it will enlarge the window on your computer so that the iPhone’s screen mirrors on a much larger scale.

Just four steps and a matter of minutes – that’s all it takes to record your iPhone’s screen. iOS Screen Recorder is very similar to Airshou, and you could even say that it’s easier to use!

Reasons to Use iOS Screen Recorder

iOS Screen Recorder, while similar, is different from Airshou. Airshou runs on your device and also records your screen using your iPhone’s resources. That isn’t the only difference though.

Recording Limits. When you record your iPhone’s screen, there are a few limits to consider. Above all, you can only record short videos. This is because of how resource-intensive the recording process is. Using iOS Screen Recorder if Airshou not working is great because it uses your computer’s resources and can record much longer videos.

Resources. Following on from above, your iPhone isn’t meant to record long videos. If you record for too long, then you’ll notice the device gets hotter, and slower, and it’ll start lagging. Your computer has more resources available, and therefore there isn’t as much pressure on the iPhone’s hardware.

These two reasons alone should be enough to convince you that our alternative is great. At the very least, check it out for yourself.

All in all, if you’re using Airshou and then all of a sudden Airshou not working, you don’t have to spend hours fixing it. One of the fixes from above should do the job, and if not, we’ve shown you an alternative to use until you manage to fix it.

iOS Screen Recorder is one of the leading smartphone recorders out there. With so much functionality and many advantages for users, it’s undoubtedly the superior recording option.

How to WhatsApp Not Working on Android or iPhone?