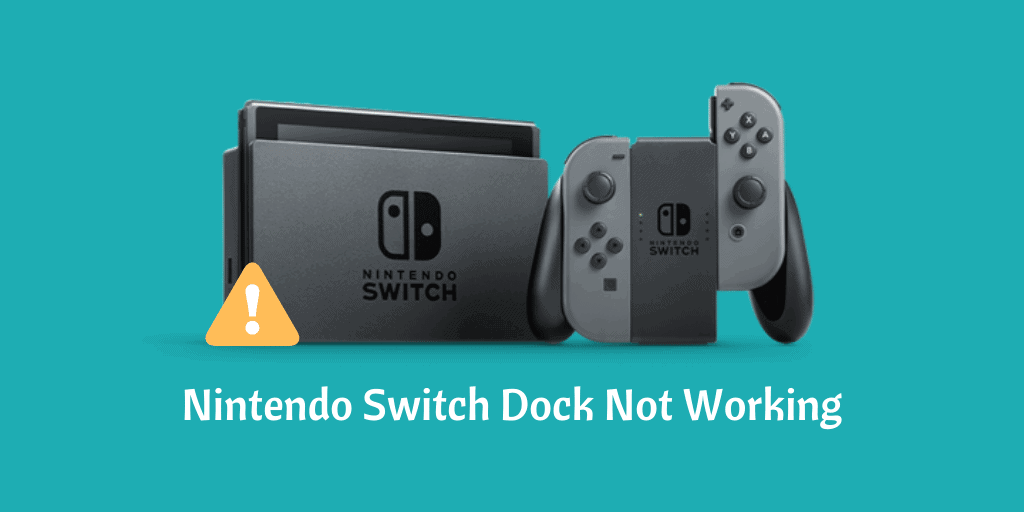 You may have found your Nintendo Switch dock not working, and the inability to know why becomes very annoying.

The following article is our endeavor to help you with some insights into the reasons for the occurrence of this issue.

We would also be providing very helpful fixes for the problem so that the users can make a fresh start.

The Switch Dock is made up of electrical connectors that give it the role of a docking station for electrical appliances. It enables one to charge the Nintendo Switch by connecting to it and can also be connected to a TV with the help of an HDMI cable.

There are various other features of the Dock which include two USB ports for the 2.0 version and one USB port for the 3.0 version. Upon docking the Nintendo Switch, it lets the users enjoy a view of 1080p high resolution along with a frame rate of a maximum of 60 fps.

Many users have been reporting several instances of the Nintendo Switch dock not working as per the expectations and the bizarre problems that occur like the Switch refusing the connection.

PS: if you wish to figure out the HDMI port is not working, just click to read more.

Reasons for the switch dock not working properly

After a careful study of the issue and all related evidence, our team was able to carve out these possible reasons for the Nintendo Switch issue.

Let’s see the fixes now. We have placed the solutions in a particular sequence based on the difficulty level. We suggest you follow the methods accordingly to troubleshoot the Nintendo Switch dock not working.

Note: We strongly recommend that before moving ahead with any fix, create a backup of all the important files and settings on the cloud base to avoid any risk of data loss.

If the Nintendo dock is not taking power, then press the power button and keep it held for about 30 seconds with the main power plugged in.

This is the first method that you should try as it can just be the easiest and quickest fix to the issue. Power cycling involves the full re-initialization of the peripherals to reset all the temporary configurations.

You will have to set new files for re-configuring the Switch. This method has given successful results in troubleshooting both consoles and computers.

Before you begin with the method, make the backup of all your data ready, and save all the files. This is because some cases involve the setting up of temporary configurations as default.

1. Firstly, you need to unplug both the power cable and the HDMI cable from the Switch Dock.

2. Now press down the power button and keep it held like that for about 10-15 seconds.

3. Leave the button and then wait for around a minute. At this time, try doing the same process as mentioned above with the Nintendo Switch and your television too.

4. Now plug back everything in and Switch on their power. Try connecting the Dock and Nintendo Switch and see if that is done successfully.

If the fix fails, then this means that the temporary configurations were not a fault for the Nintendo Switch dock not working. The problem must be in the hardware modules, and the next fix will deal with that. Read on.

Fix 2: Insert the Cables in the Right Order to Fix Nintendo Switch Dock Not Working

You might be thinking that this is a very bizarre thing to do. However, when we studied the issue, our investigation revealed that a particular bug might affect the Switch dock into non-functionality.

The dock can then be worked with only if certain cables are inserted in a specific order. The cables that we are talking about are these- the HDMI cable, the Switch peripheral, and the power cable.

We discovered that the Switch dock suffers from a firmware failure if it doesn’t get the power supply before the connection of the HDMI cable with the television.

Besides, if your Nintendo Switch is not connecting to TV, you might feel so annoyed, so here, let’s figure out why this happens and how to fix this issue with ease.

Now you must have realized that everything about this method revolved around the ‘right order.’ So just follow the steps we give below very carefully.

1. Remove all the cables from the dock, and that includes the ones that we listed above too.

2. Now, firstly you have to plug the power cable into the Switch dock and turn on the supply. Make sure that it is receiving the power by checking if the power LED is lit.

3. Secondly, plug the HDMI cable in. You must have already connected the HDMI with the TV and also selected the HDMI input so that everything is ready.

4. Lastly, you have to connect the Nintendo Switch to the dock. If the method succeeds, the green LED light will be lit up, and the dock input will change to HDMI.

Use the Switch device and the dock now. The issue must be resolved probably.

Fix 3: Check the Power Cable to Fix the Nintendo Switch Dock Not Working

As we have already mentioned, the Switch dock plays a dual function of being a connector between the TV and Nintendo Switch and a charger for the Nintendo Switch. Given that it performs such heavy tasks, it is obvious that the dock will demand a decently large supply of power.

If the power supply fails to be adequate for the dock, it will cease to function normally. You will come across various issues like the Nintendo Switch dock not working due to charge failure or the TV failing to connect properly with the HDMI.

You can take the example of a Power supplying unit of a PC. If this PSU doesn’t have the capability, which means that its wattage is unable to carry the power of the tower modules, then these modules, like those of the graphics cards would not be able to power on and run.

To avoid this issue, check that you are using the original cable of the Switch dock. Another very important factor to check is that the power cable is being plugged into an independent supply outlet.

You may think that this is a useless point to think of since the dock will anyway consume the same power amount even through an extension power station with other plugins too.

However, it looks like the dock prefers being inserted into a single outlet, and the power supply is not being shared among many electronic appliances.

Now there occurs a split situation that many users come across. Here, they see that the dock is successfully charging the Nintendo Switch, but the TV is not getting connected to the Switch.

In such a case, you should straight away go ahead to check the HDMI cable. This cable is the one responsible for establishing a connection between the dock and the television. If the HDMI cable itself happens to be faulty or has any issues, it will not transmit the content properly and result in the Nintendo Switch dock not working to connect.

Note: It is to be sure that you have already made the right setup by choosing the TV’s input settings. Each television has some settings that allow you to choose and change the input source for the Television to display. Also, check that the correct input mode is set, which is the HDMI in this care. There can be more than one HDMI source in some cases, so check for that too.

Fix 5: Check the Dock for any fault

If nothing else worked out, then you might have to come down to investigate the Switch dock itself for any fault, lastly. There are many instances where the problems happen to be in the dock itself, involving its inner hardware modules being faulty.

If this comes out to be the case with you, understand that you cannot make the dock work in any way yourself.

What you can do is check the dock for any fault by doing a simple thing. Just get the dock of any of your friends and plug the Nintendo Switch and television into it. Here, you have to follow the steps of Fix 2.

If the alternative dock fails too in connecting with the TV or the Switch, then the issue is with the setting most probably. However, if the dock does connect successfully, then your dock stands testified as being faulty.

If none of the methods worked to fix your Nintendo Switch dock not working, your last bet can be taken from the customer service experts.

You can reach out to these centers through their support websites and talk to the experts thereby. They will give you an apt solution for your situation and act accordingly.

How to Use Fly GPS for iOS to Change iPhone Location

No Sound on Laptop? Don’t Worry, Let’s Fix It!