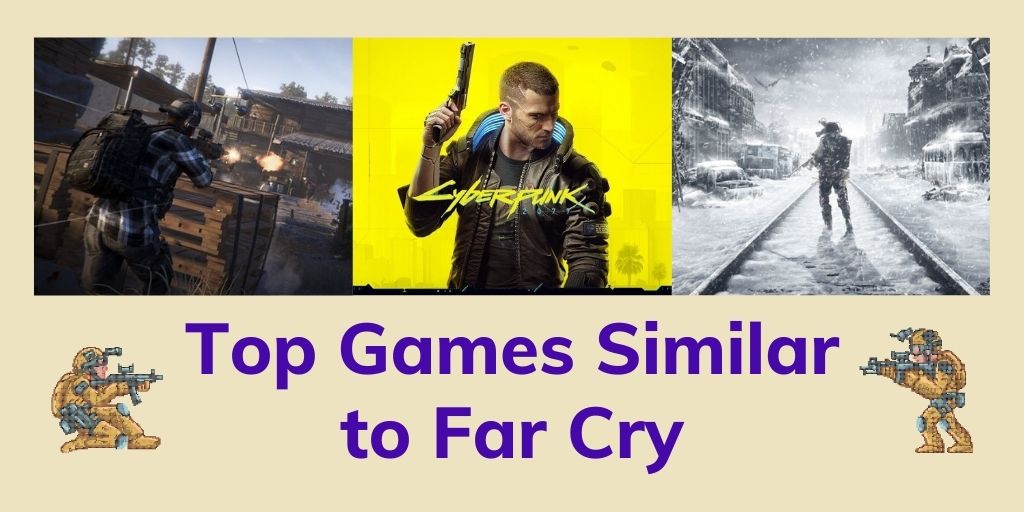 Far Cry, one of the earliest first-person shooter games, has been very popular since its first release in 2004. Ubisoft Montreal develops it as well as Ubisoft Toronto.

Being one of the earliest FPS games published, it laid the foundation of FPS and made the path clear for many fantastic FPS games afterward.

If you are a fan of open-world FPS, these games like Far Cry 5 below will be a good decision.

Many of these games are supported by either PS4, Xbox, or PC. So feel free to download them if they catch your attention.

If you are finding a game like Far cry 5, then Cyberpunk 2077 will be one of the most valuable and interesting to play with before the arrival of Far cry 6.

Besides the fact that it’s more futuristic, Cyberpunk 2077 is so detailed and complicated that it will affect the players as if they are really in the world of Cyberpunk.

In this game, you will be customizing a protagonist with high featured abilities and appearance. In Night city, the kind of world similar to many games, there’s some side quest for you to complete. Don’t forget the weapons in the game for you to collect and use too.

If you find a game similar to Far Cry 5, Cyberpunk 2077 will be one of your BEST choices.

Two things that came to mind when I think about the Fallout series are the game’s scale ( Bruh, ridiculous!) and war.

This game provides you with a large, playable amount of areas and a huge number of side quests. Except for these factors, the eccentric characters in this series will also bring you interesting game experiences.

Even though some of the earlier Fallout series may be outdated, Fallout 76 will still fit the modern taste. Looking for the experience of Far Cry and open-world experience? Fallout is surely a great decision for games like Far Cry 5.

Besides, here are the best games like Rainbow Six Siege and the top games like Horizon Zero Dawn for your reference.

This game is simply Far Cry with zombies. Impressed by the parkour scheme and the stories, many players are introduced to the game.

There are many series of Dying Light, including “Dying Light The Following,” which firstly introduces the new factor, vehicle, to the game. Meanwhile, you can collect new weapons, rifles, and melee.

Even though in the first part of the game, more melee weapons and techniques are required. You will soon realize that your chance of surviving will become very low without guns. Those weapons are also needed against the crowd of zombies and special bosses.

Homefront: The revolution is an open-world FPS with a more contemporary setting. This game is difficult by your enemy’s technology and weapon support. You will perform like a warrior fighting against North Korea for freedom.

You are also required to learn different kinds of strategies and warfare to lead your team to victory. Being an open-world First-person shooting game, it will also be one of your great choices if you are looking for games like Far Cry 5.

This game might be similar to GTA, but you will soon discover its ideas and unique way of playing after deeper gameplay.

The crime and features are well organized, with the playable side quest and the freedom of “doing anything” in the city. These make the world of the Mafia more interesting despite its dialogues and stories.

All three games in the Mafia series were released this year, so it will be a wonderful time to check those out.

It’s just like GTA, but it takes place in a less modern time. Even though the time is different, you can play with bigger and more destructive weapons.

Any one of the Just Cause series will bring you many ways of causing destruction. Different maps are available for you to destroy. Some of the maps are bigger than the maps in Far Cry. It’s available on Xbox, PS4, and Steam.

With these factors, the Just Cause series will bring you similar experiences as the Far Cry games. so it’s surely one of the best games like Far Cry 5.

This game connects the factor of the monster-fighting Diablo games with the FPS factors of Far Cry. The setting of Borderlands is more futuristic, and there are many different types of weapons and enemies for you to defeat.

Unlike other monster-fighting games, this game has better replayability. It has different classes to choose from, will be more flexible and requires more strategies combining weapons and abilities to fight against enemies.

And click here for more games similar to Borderlands.

Ghost Recon: Wildlands supports both multiplayer and single-player gameplay. Your goal in this game is to take over Bolivia with your four “ghosts.” There are more than 60 vehicles that you can use in this game and lots of guns.

This is simply the game of Far Cry, and more team-leading strategies are joined together, which is a great choice if you are good at leading a team, and better with a few friends playing with you.

This is the FPS game you start in the middle of a quarantined area, where a nuclear explosion just happened. This game got the RPG feeling that Far Cry does not quite have.

The main point is survival in an unknown area where odd creatures and weird phenomena are happening. Finding RPG experiences but still similar to Far Cry 5, surely check this out.

The Rage series is heavily inspired by the Mad Max films and was very similar to the Mad Max game. Nevertheless, it focused more on combat with others and fewer RPG factors.

Created by the same team of Far Cry, Crysis was published earlier and raised the average computer graphic bar. Even being a 2007 game, it includes many factors that are still popular nowadays.

Crysis includes different environments and allows players to have better and more exciting gameplay while vehicle factors are included.

If you liked Far Cry and are waiting for Far Cry’s new establishment, feel free to try the original and “old” FPS that captured the essence of Far Cry.

If you are a fan of single-player FPS and prefer to play alone, then the Metro series is the best decision for you. The Metro series doesn’t even support multiplayer.

All three games in the Metro series are available on PS4 and Xbox One, but games will eventually get better with age. The weapons became more detailed, delicacy, and the views and background of the game became more realistic.

But still, all three games in the series are worth playing. Finding a single-player game that is similar to Far Cry 5? This is the game right for you.

These games will be a good choice if you like Far Cry. Many of these games are similar to Far Cry but also include more interesting elements that make them better.

Some have intense stories and dialogues, and some have endless side quests or even ridiculous scales. Of course, these are not the only ones you can try, but these are the games that most players found to be most fit with Far Cry and made the Far Cry players feel at home when playing these video games.

As stated initially, most games are featured on either PS4, Xbox, or PC. So if you get your mind on these games, feel free to download and try them while you are waiting for Far Cry 6.

Timothy is a student beloved of art and science. For him, programming and playing the guitar are as much fun as gaming. He believes that the fusion of science, art, and entertainment will guide you to play the vast universe.

Pokemon Go Great Throw – How to Make It With Ease