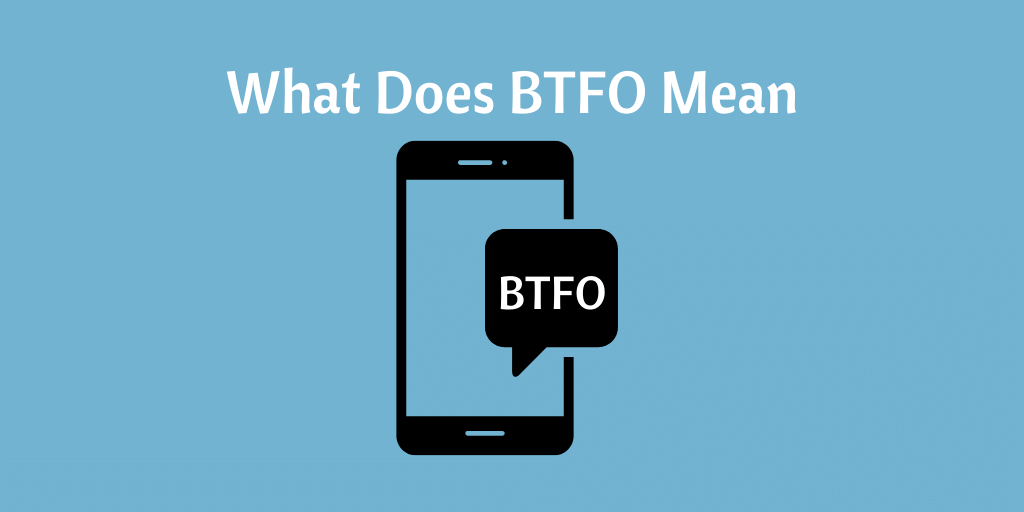 If you have been confused about the BTFO meaning and you want to know what BTFO means, then this article is going to enlighten you with all the necessary information.

The internet world has constantly changing trends, and BTFO is one such slang that is gaining acceleration in circulation.

The interesting thing is that BTFO has a dual meaning. To know more, read on.

PS: if you wonder what TC means, click to read more.

What is the first BTFO Meaning?
What is the second BTFO meaning?
How do we differentiate between the usages of the two BTFOs?

What is the first BTFO Meaning?

The first BTFO meaning that we are going to take into consideration over here is “Back the f*** off.” Simply put, using slang is just another way of asking someone to back off or move back if they are standing near you or you do not like the trouble that they are putting at you.

When you cannot think of any other way to stop them, it is then that you might end up using this slang in the conversation.

The obvious thing to note about this slang is that it has a tinge of vulgarity and impoliteness in that a simple “back off” could have done the job. You use this term because you want to make it obvious that you are not liking what the other person is doing, so they really need to stop there.

The term has become an active part of conversations on social media platforms. Other than that, many people have started to make the F-word a very usual part of their daily speech.

When the F-word is used by someone on various social media conversations or generally, it denotes that they want to add a certain level of force and intensity to a sentence and make the message more obvious thereby.

People even use it to nudge the random people who trouble them by stalking their IDs or even sliding into their DMs, making the situation difficult and annoying.

It doesn’t matter if you want to convey your annoyance at something or want to express your feelings of being dominated or victimized; saying ‘Back the f*** off can‘ can just put your message very clearly and quickly to the forefront.

It is not to imply that such acronyms that have a negative overtone are only used offensively. The abusive acronyms also find usage in positive situations like CTFU, Cracking the f*** up, and others.

The main purpose of using such acronyms is to put the intensity of any situation out clearly, and the way chosen turns out to be aggressive. AF is another example.

Similarly, the slang ‘Back the f*** off‘ represents annoyance or anger. It also makes its way into the messages with an amicable tone. People use it for chit-chats with family and friends too.

Let us look at some examples:

Your friends came unannounced and had constantly been buzzing the doorbell, so you say, “BTFO guys! Stop knocking, or I am going to shoot!“

You want to stop a friend from spamming your FB wall, so you say, “BTFO bro! Stop posting all this.”

The difference between a normal phrase and these acronyms is clearly visible. Suppose you are taking a walk along the roadside, and you see someone following you continuously.

What will you say to them? You will either say ‘Back off‘ or ‘Back the f*** off.’ You can yourself decide now which of the phrases has got more power in terms of assertion. Also, which one sounds more polite?

In similar situations, as talked about above, one cannot think of being polite as the solution. We need to be more assertive and dominant in the tone, and the F word makes it possible by adding the required intensity.

What is the second BTFO meaning?

The next and last answer when you ask what BTFO means would be “Blown the f*** out.” This is another acronym meaning and is used to represent a higher intensity in any sentence.

A direct emotion denoted by this slang is the feeling of any loss in some kind of a dare or maybe any competition. The situation can be any sport, game, or any other similar event where there are chances of you getting ‘blown out‘ or defeated badly by the other party.

The more common use of this slang, “Blown the f*** out,” is made in conversations built around a situation that involves games of two or more players and where there is a possibility of any side winning or losing the game.

The term gives a more vulgar tone to the sentence expressing the feeling of losing badly to someone. The specific interpretation tends to make the use more frequent in situations where anyone has been beaten up by someone else to a considerable degree.

You generally won’t use this slang in situations where the competition or face-offs are easy, and the difference is too meager to consider.

Let us look at some of the examples to understand the usage of this slang better:

Imagine a situation where your favorite baseball team lost to any other team with a huge difference in goals, say 0-3. What would you say in such a scenario? – “I just hate baseball. My team got BTFO by theirs!“

The usage of BTFO is not restricted to such a situation as a loss or a win only. See the next situation.

You are telling an incident to your friends where you were walking down the road, and a vehicle passed by, raging in speed, and all the muddy water was splashed at you. So you exclaimed – “BTFO by the idiot man!“

In the above situation, you tried to amplify the sense of the incident by adding the acronym to the sentence. You had to go through an inconvenient situation, and the term somehow explained the impact better.

Some more examples would be

How do we differentiate between the usages of the two BTFOs?

It is clear now that there is not just one answer to anyone wanting to know what does BTFO mean? There are two interpretations of the BTFO meaning, and both are very different.

However, the real problem lies in the right interpretation’s determination, and it can get very confusing to understand the speaker’s intentions.

Let us help you understand that better by giving out some basic pointers:

If the BTFO would be implying “Back the f*** off,” there would be a clear indication of victimhood in that particular message or sentence. You will sense feelings of disgust, offense, defense, and similar other negative emotions.

If the BTFO would be implying “Blown the f*** out,” then there would be a clear indication of competitiveness in that particular message or sentence. Look out for a feeling of loss, victory, or some competition.

If you haven’t known the BTFO meaning and the thought that what BTFO means bugged you every time someone used the slang, then you shouldn’t really feel bad about it. The acronym is still not very popular, and we hope to have familiarized you with it in the best possible way.