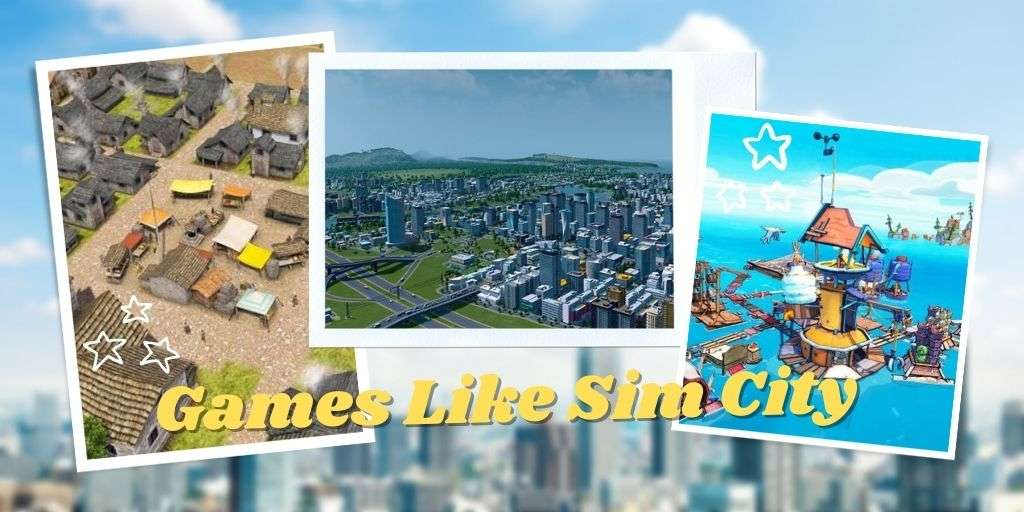 In this article, we intend to discuss games like Sim City for those who love that genre. So, if you are a fan of SimCity’s similar games, you can find several options here.

Keep reading and find some interesting games to play when you have some free time.

The Sim City franchise was initiated in 1989 by Maxis, so it has quite a history. Since then, it has gone to spawn a variety of titles, and Sims is one of those.

Well, in simplest terms, the purpose of the Sim City game is to build a city. This city should comprise all the essentials, including hospitals, banks, parks, roads, and whatnot.

However, Sim City is not the only game of its kind. There are many other games like Sim City. If you are a fan of SimCity’s similar games, the below list will be a good inspiration for you.

Mentioned below are the SimCity similar games for anyone who loves that type of game. Go ahead and pick a couple of games for you.

Besides, if you are looking for the best games like Jackbox or the top games like GTA 5 for Android, here you are.

Here’s the first entry to our list of games like Sim City. Anno 2070 is a game in which you are supposed to build complete cities and establish a flourishing economy.

In addition to that, this game comprises real-time elements. Basically, it can be considered a part of the Anno series. However, it still remains one of the best SimCity similar games.

As per the gameplay, you will be in the year 2070. At that time, it simulates a world where global warming has wrecked all the polar ice caps.

As a result, the world is affected by floods as well. That has led to the destruction of old cities. New islands have emerged.

Now, the player is supposed to settle in those islands and build cities from scratch. Sounds interesting, isn’t it?

Aven Colony is released in 2017 for consoles like PS4 and Xbox in addition to the PC version. The game is based on a plot in which you should colonize an alien planet. Those who’re fans of the sci-fi genre will definitely enjoy this game.

As per the gameplay, you should build farms, mines, etc. Also, you should eradicate alien bugs and fight some unpredictable plagues too. If you want, you can even travel out and fight against alien spores as well.

In fact, this game is considered to be a sequel to the game called City Life. This game also allows you to play in the form of multiplayer. That is in addition to the single-player mode. The choice is yours.

Apart from building cities, this game allows you to create a range of different transport modes. Bridges and tunnels are examples.

It is possible for you to create various elements, including airports and subways, and even buses. If you need to make your city a lively one, you can add those elements. There is no shortage of residential lots to choose from depending on the class of the citizens.

Then, you can even add commercial and industrial lots to the game if required. All in all, it is a wonderful game for those who want to play SimCity similar games.

If you don’t like the concept of Aven Colony, you can consider Surviving Mars too. This special game was released in 2018. This game offers you the challenge of inhabiting mars and sustaining the life on it. Needless to say, it is a pretty challenging task.

Apart from the intricate buildings and proper management of resources, you should maintain some specific stats as well. Those statistics are unique to each colonist.

In addition to that, the game lets you try a range of difficulty settings. With such characteristics, this game opens up a good opportunity for both professionals and novices.

For many individuals, “Banished” might appear as a regular type of city builder that has an old-school theme. But this game has plenty of unique mechanics to surprise you, and its gameplay is very nice.

This game is focused on some economic theories as well as the sustainability of society. It also shows the importance of making some dynamic decisions when handling the property.

This game falls more into the RTS (Real-Time Strategy) genre. The entire series comprises some excellent building mechanics that are found in the genre. In fact, it can compete with any other game in this genre because of those characteristics.

With each entry, you will be able to play in a different era and a geographical location. Nevertheless, all of those games expect you to follow the same approach and principle. That means you should survive, build structures and grow the colonies.

It is very engaging gameplay, and it has enough challenging features. The game is fair as well as rewarding no matter whether you are a seasoned player or a novice. All in all, this can be considered one of the best games like Sim City.

PS: here are the top games like Age of Empires for your reference.

The game starts as a survival game. However, in the end, it turns into an aquatic city-builder. You can also learn a very important lesson about the environment in this game.

Flotsam is considered to be a very rare game that also has a powerful political message. But that doesn’t ruin the excitement and the joy of the game.

If you love to enjoy the concept of complex and challenging games, this could be a superb option. This is a game that requires you to build the entire city from scratch. In addition to that, it wants you to protect those buildings from foes called The Greed.

Those who have played games like Sim City know the importance of managing resources properly. You should spend your gold coins properly, and that decides how your progress through the game.

You are supposed to focus on a defensive approach as well and build outer walls, archers, etc. In addition to that, you should consider those money-making opportunities like farms as well.

If you are looking for an easier game to play without too confusing strategies, here’s a good choice. Cities: Skylines is a game that comes with a fun-centered approach. Also, it gives you the option of having more free space to play.

If you want to enjoy the feeling of building a civilization from scratch, this could be your game. This game will surely get your attention because of its amazing characteristics. As per the game, it wants you to survive in the Iron Age of the earth.

The game is a superb one, particularly because of the mechanism and the strategies you should use. It has unique buildings, clothes, and many other elements to make you happy and excited. Basically, this is one of the best games like Sim City due to various reasons.

You don’t find a large range of games that are based on the Industrial revolution. This is one of those games that comes with interesting characteristics.

We consider this game as one of the best SimCity similar games due to several reasons. The period they have used is so dynamic and complex. Also, it is filled with a range of different political, social, and economic changes.

So, your possibilities in this game are incredibly vast. Anno 1800 comes with packed features, and it has plenty of things you would love.

As per the game, you are supposed to play the role of a company leader in a colony. The same character plays the role of de factor governor. It is a very unique and challenging setting for you.

Are you a fan of the RPG concept apart from Sim City and looking for games like Sim City? If so, this can be a superb option to consider favorably.

This game shows a lot of RPG elements in the play. You are supposed to manage a settlement in the dungeon. You can explore the same.

Well, the developers of this game have mentioned that this game is inspired by similar games like Diablo.

Another fun aspect of this game is that it allows you to choose a biome as well. In that, you can start the settlement, and you can choose snow, grass, or other materials. The most important thing about this game is that it is an abandoned project which is also unfinished.

This game, however, is still playable, and you can experiment with it if you want something unique.

This can be considered an absolute classic game. Frostpunk also features the most challenging gameplay in this list of games like Sim City. This game expects players to survive in a very hard ice age which is unexpected.

In addition to that, it has various other hardships to overcome. Well, if you are looking for something easy and fun, this is not for you. However, for an expert gamer who loves some challenging tasks, this could be a superb option.

Well, that’s our list of SimCity similar games. You can go through this list once again and pick a game or two to play. We appreciate it if you can mention a few other games like Sim City so we can update this list.