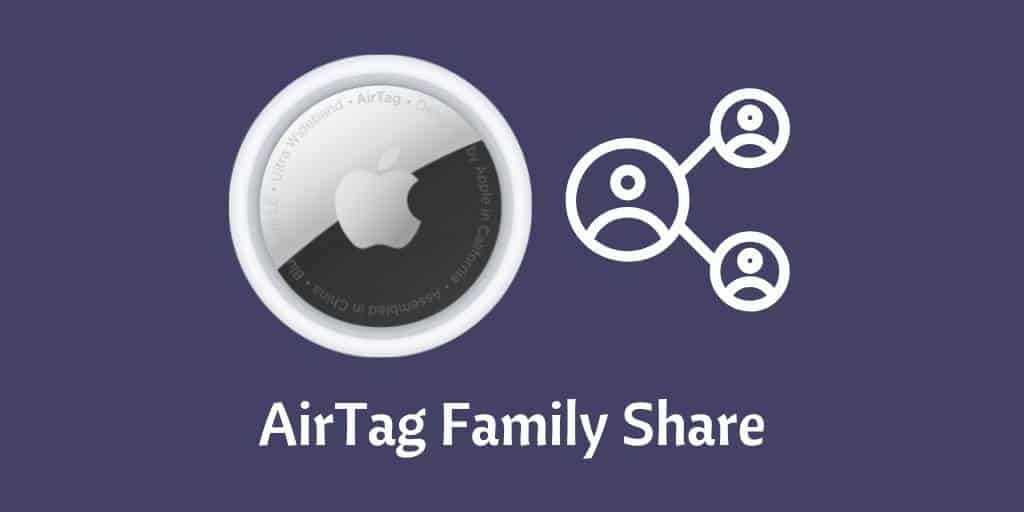 “Is it possible to share AirTag with family members?

If it is, how can I do that? I think it will be useful for me so even my family knows where my belongings are.

The above is a question asked by a new AirTag user in a help forum. Keys, wallets, backpacks, purses, luggage, and other misplaced items are simple to locate and track with AirTags.

That said, can your AirTag location be disclosed to your family members? Well, this is a common query from brand-new AirTag users. If you have the same question, keep reading because this post is just for you!

The truth is that only one Apple ID can be linked to a single AirTag. Because of this, you can’t tell loved ones where your AirTag is. So, there are many individuals who ask if somebody could monitor your AirTag.

Also, they wonder, “can you share the AirTag location with relatives and friends?” Some even ask if it is possible to transfer the AirTag they own to someone else?”.

That said, in this article, we intend to answer all those questions and more.

Can My AirTag Be Tracked by Someone Else?
Can You Share AirTag with Your Family?
Is It Possible to Transfer Ownership of Your AirTag?
Mentioned Below is How to Remove an AirTag from Its Apple ID
Let’s Learn How to Reset Your AirTag
Privacy and Security of AirTags
Frequently Asked Questions
Is AirTags Rechargeable?
What is the Range AirTags Can Cover?
Can I Connect Someone else to the Same AirTag I Use?
Can I Connect Two Iphones to a Single AirTag?
Does AirTag Work Base on GPS Technology?

Can My AirTag Be Tracked by Someone Else?

If you’re wondering whether or not anyone else can follow your AirTag, the answer is no. It is true that AirTags can determine your whereabouts by communicating with other neighboring iOS devices.

However, the entire process is carried out anonymously and protected to safeguard your privacy.

Important: you must know that even Apple Inc. doesn’t know the exact location of AirTags. They even cannot find out the identity of the respective device used to find the AirTag.

Keep in mind that no one else can track your AirTag’s whereabouts but you. The location and activity history of your AirTag is never saved on the device itself.

The iOS devices that report the location of your AirTag remain anonymous throughout the entire process.

Because of that, it makes it absolutely impossible for anybody else to monitor your AirTag. This is specifically true because location data is encrypted at every stage.

Compared to other products in the Apple lineup (Mac, iPads, and iPhones), AirTag doesn’t come with location sharing enabled. That means you cannot necessarily share the location of your AirTag with anyone, including family members.

Assume that you sign up for an iCloud or Apple Music plan through the Family Sharing option. You and five family members can listen to the same playlists or store the same photos in the cloud.

With Family Sharing, you and your family members can help one another find lost devices. However, you can’t trade AirTags.

Tip: A single Apple ID can be linked to 16 AirTags at the same time. That means all those 16 AirTags can be tracked simultaneously through that respective Apple ID. This is something you should know if you wonder how to perform AirTag family share.

Is It Possible to Transfer Ownership of Your AirTag?

Now that you got to know if you can share AirTag with family or not. Let’s learn more. There are many individuals who wonder if it is possible to transfer an AirTag to someone else.

For instance, think about a situation where you want to sell a used AirTag. Or how about purchasing a used AirTag? Well, the good news is that it is possible to transfer your AirTag to anyone else. But, before you do it, the respective AirTag must be removed from the Apple ID.

You can rest assured that nobody will be able to unpair an AirTag from its associated device remotely. This is specifically due to the Pairing Lock function.

If you no longer want to utilize an AirTag, you may simply detach it from the Apple ID. So, following, we will examine how to delete an AirTag.

Besides, if you wonder do AirTag need to be charged every now and then and how far do AirTags work, here, you will learn everything about AirTags and functionality.

Do you want more information about erasing an AirTag off your iOS device and the Apple ID? If so, you can visit the dedicated help website Apple provides.

Tip: Assume that the previous user has removed their AirTag from the respective Apple ID. However, if the AirTag is away from its Bluetooth range, you should reset the AirTag prior to using it. Otherwise, tracking will not take place as expected.

Also, if you wonder, does AirTag have GPS technology? If not, what is the technology it uses to transmit its location accurately to the linked iOS device? Let’s find out the truth.

Let’s Learn How to Reset Your AirTag

Every AirTag you have is connected to your Apple ID, making it impossible for anyone else to trace it. Devices that transmit the position of a missing AirTag remain anonymous.

In addition to that, the location-related data is encrypted at every stage of the process. Location data is not kept on the AirTag itself, nor is its location history.

Assume that a missing AirTag is acquired by another person’s device. In that case, you may be able to view its location on a map. However, you won’t be able to learn the name of the person who assisted you in finding it.

Because of its end-to-end encryption, Apple is unable to determine the whereabouts of any AirTags that it has distributed.

Well, AirTags come equipped with one-of-a-kind Bluetooth identifiers that change on a regular basis. Thanks to this feature, you will never be followed from one location to the next.

Here are some of the questions you may have about AirTags.

No. There is no way to charge your AirTag. However, it comes with a replaceable battery instead. The CR2032 battery that powers AirTags can be swapped out and is good for around a year of use.

Users may easily remove the battery compartment by pressing and twisting the back cover of the AirTag. When the battery life of an AirTag gets dangerously low, a warning is sent.

What is the Range AirTags Can Cover?

Apple has not published any information regarding the range of an AirTag. However, the maximum distance that Bluetooth can achieve is approximately 100 meters.

So, an AirTag must be discoverable, at least to this extent. Additional testing will be required in order to provide more exact information regarding the range.

Can I Connect Someone else to the Same AirTag I Use?

No. You can’t share an AirTag with anyone. If you want to add someone else, you should erase it from your Apple ID beforehand.

Can I Connect Two Iphones to a Single AirTag?

No. You cannot use an AirTag with two iPhones at the same time. In fact, it should be associated with only one Apple ID at a time.

Does AirTag Work Base on GPS Technology?

Well, AirTags are not designed to work based on GPS. So, it doesn’t use GPS.

To summarize, then, is it possible for family members to be informed of the location of an AirTag? No. As per their design, AirTags are only able to have one Apple ID connected with it. Because of that, the position of an AirTag will never be shared with another user.

The Family Sharing function that Apple offers does not permit sharing the location of an AirTag. It’s true that this limitation in functionality will likely dissatisfy some individuals.

However, it does guarantee that your anonymity will be preserved whenever you make use of an AirTag. So, can you share the AirTag location? No!

Does AirTag Have GPS? If Not, How Does It Work?