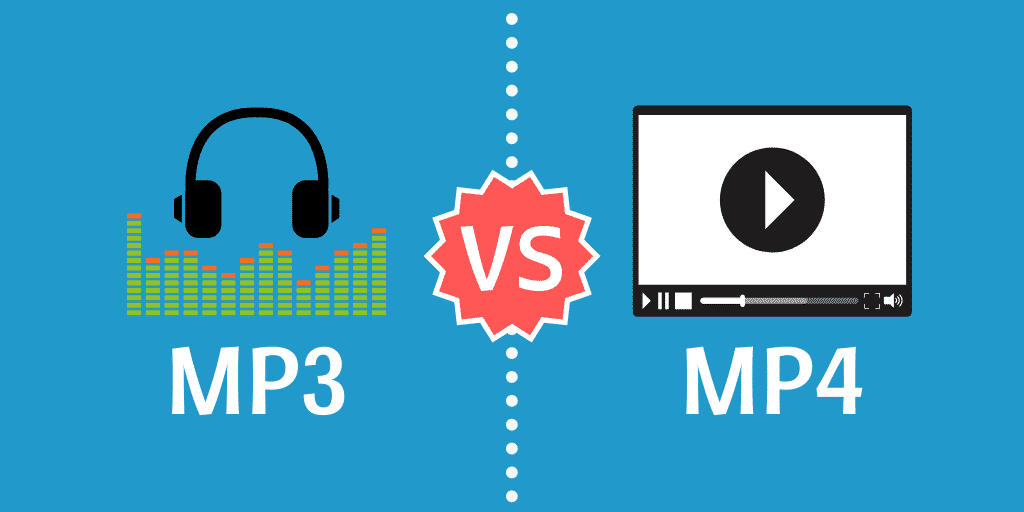 The people who are fond of listening to music are very well aware of the MP3 file format. It is a more than twenty years old format, which, now, has been succeeded by the MP4.

However, there is just a difference in numbers (3 and 4) in the names of the formats, which might indicate that MP4 is the next generation of MP3. Yes, it is true, but actually, it is not the only difference.

At present, both the MP3 and MP4 formats are available. So what is the difference between MP3 and MP4? Which one is better and which one should you use?

In this article, I have explained the topic of MP3 vs. MP4 in detail. So just keep reading till the end.

Now the question is how the MP3 format manages to end up having a size smaller than the size of the format in a CD. It actually becomes possible with the use of the “Lossy Compression” process, just like the size of the JPEG file is compressed without having any effect on the main content of the image.

When an audio track available on a CD is converted or extracted into the MP3 format, the size gets compressed to almost a tenth of the original size. And, no noticeable difference is found between the two forms when listened to by human beings.

In the “Lossy Compression” process, an uncompressed and original audio file (in digital form) is taken, and then some unimportant data is removed from the file without affecting the main and noticeable content.

Thus the size of the Audio file is compressed to a size smaller than that of the format in a CD when it gets converted into an MP3 format. And, the audio in the MP3 format just looks like that in the CD format. Keep on reading on this MP3 vs. MP4 review.

When an MP3 is created from a CD or vinyl album, two main parameters need to be decided. These two parameters are the sample rate and bitrate. And, these are the parameters that will determine the file size and quality of the MP3 to be created.

As far as the sample rate is concerned, 44.1 kHz value is generally used. But bitrate can be taken within the range of 8 kbps to 320 kbps. Eight kbps will create the lowest quality file. And on the other hand, 320 kbps will create the highest quality. With 320 kbps, the quality will be so high that you will not be able to differentiate between the created MP3 and the original CD.

Moreover, the higher the bitrate, the larger the size of the file will be. So it will be better not to use too high bitrate if you don’t want a very large-sized file. But keeping in mind the quality also, 128 kbps is the minimum recommended bitrate.

That’s because, below 128 kbps, anyone can easily notice the deterioration of the sound quality. Hence you should use a minimum of 128 kbps bitrate or even more than that.

PS: here, we will learn more about how to convert music from Spotify to MP3 with ease.

As mentioned earlier in this MP3 vs. MP4 review, that MP3 is an audio file format, and MP4 can store both Audio and Video. And, even some other data like subtitles can be stored in an MP4 file.

MP4 is a container, so it is up to you which audio codec is to be used for your audio data. Generally, Advanced Audio Coding (AAC) codec is made used of. AAC is the latest technology of compression.

In addition, in the case of MP4 files, there is an option of ALAC also. ALAC can preserve all the data of a vinyl album or CD, still compressing the original size to smaller. If you are in need of archiving music, it will be a great option for you.

Difference Between MP3 And MP4

Now that you have a basic understanding of what exactly the MP3 & MP4 are, you will not have any difficulty in understanding the difference between both. Below I have listed the most important and key differences for you to have a quick overview:

In this MP3 vs. MP4 review, when it comes to quality, MP4/AAC is far better than an MP3 with a similar size. That’s because AAC is the latest technology of compression (as mentioned earlier also). Moreover, the audio or music file that has been archived in MP4 with the use of ALAC is much better than an MP3.

The reason is that ALAC can preserve all of the details of a vinyl album or CD (as mentioned above) while still reducing the original size of the data. Moreover, such an MP4 can be converted into MP3 anytime you require it. But in the case of MP3, it is never possible to convert it back into MP4.

Also, if you wonder how to convert h264 to mp4, this guide is just for you.

Which One Should Be Used: MP3 or MP4?

If you are using an old-fashioned portable music player, you should use an MP3 file format. That’s because such a music player may not support MP4/AAC format. And, on the other hand, MP3 files will play well on any type of device that can play digital music.

Moreover, if you have a large collection of audio files in MP3 format that you have produced at 256 kbps or even higher, you should keep them in the same format.

But, in case you are planning to transform analog data into digital files or planning to create some CDs from scratch, I would recommend you to go for MP4. An MP4 with an ALAC codec will be the best option to go for. And, whenever required, this format can be anytime converted into any lossy format of your choice like MP3. Let’s go on with this MP3 vs. MP4 review.

Keeping this fact in mind, both the MP3 & MP4 file formats have been developed in such a way that both the formats support metadata. That’s why mobile music player apps support files with such formats.

As far as the MP3 file format is concerned, it makes use of ID3 tags. With these tags, information like song title, album, artist, track number, and album artwork can be stored easily within the file.

Similarly, on the other hand, MP4 files are also capable of making use of the metadata. An added advantage of the MP4 file format is that it also introduces XMP. Here XMP is the abbreviated form of Extensible Metadata Platform. XMP is considered to be highly suitable with the container format of MP4. And, it is compatible with a large number of types of files like JPEG, PDF, PNG, GIF, WAV, PSD, TIFF, PostScript, Adobe Illustrator, etc.

I hope the information provided above is enough to make things clear for you on the topic of MP3 vs. MP4. And, now you must be having a clear understanding of what exactly the difference between MP3 and MP4 is and where you should use which one.

What to Vlog About – Funny Vlog Ideas / Topics For Beginners

Optimizilla – One of the Best Online Image Optimizers