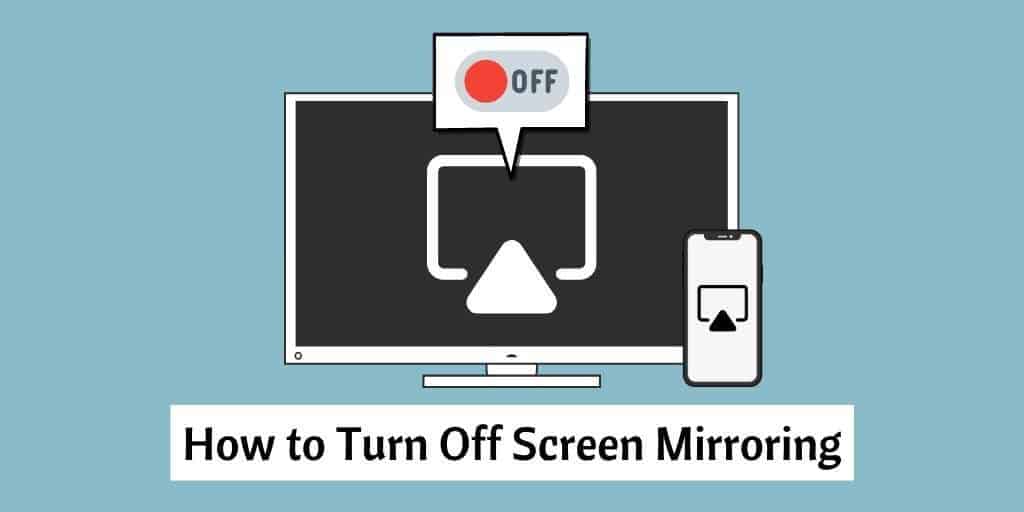 Knowing how to turn off screen mirroring is almost a must-know for any smartphone user these days. So, we thought of composing this article focusing on the proper and easy way of turning it off. Let’s go ahead and learn this process on different devices.

Mirroring your screen is a great way to have a good time while doing things like watching films. It also becomes handy in playing games or using gorgeous backdrops.

However, disabling it can be a bit of a pain. And most importantly, you certainly don’t want your privacy compromised by accident. We’ll get to the benefits of screen mirroring in a minute; for now, here’s how to disable it.

1. Turning Off Screen Mirroring on an iOS Device (iPads and iPhones)

If you are an iOS device user and wonder how to turn off screen mirroring on it, keep reading.

Swipe down starting from the rightmost corner of the screen on iOS 12 or later. The iOS 11 feature that allows users to swipe up from the home screen isn’t available on older devices.

You will be able to find this Screen Mirroring feature under several other options. Just tap it so you can see the device to which your phone is mirrored.

Also, are you experiencing a screen mirroring not working error and looking for a solution? Well, here are the best solutions you can try.

In addition, this article will introduce you to the easy ways to turn off voice assistant on Samsung TV and some pros and cons of the voice guide.

2. Turning Off Mirroring on an Android Device

While different Android phones may have slightly different features, they all share a function known as Casting. Please note that it is also known as Screencast as well in some situations.

This article will discuss the numerous methods available for disabling the screen mirroring feature on an Android device.

With a simple tap, you will be able to power down all of your connected gadgets. Keep in mind that there may be differences in model names and even physical appearance.

If You Own a Xiaomi Phone, Check out This Guide:

If you intend to make use of Google Home to accomplish the same task, here’s how to do that.

To accomplish this task, however, the smartphone and the respective Chromecast should be on the same network.

3. How to Turn Off Screen Mirroring on a PC

Well, Windows 7 includes a feature called “Project to this PC” for screen mirroring. You probably already have if you wish to disable the mirroring function. Simply turning it off is all that’s required.

Let’s check over the Windows 10 settings for disabling screen mirroring.

And that’s how to turn off screen mirroring on a Windows PC.

4. Disabling the Screen Mirroring Option on Your Chromebook

When it comes to screencasting Chromebooks, there’re two different solutions to try.

You wish to switch off your device’s screen mirror on the Chromebook when a different device mirrors the display.

You intend to switch off the mirroring on every device completely.

And that’s how to turn off screen mirroring.

5: Turning Off Screen Mirroring on a Mac

It is possible to disable the AirPlay feature on your iMac or even MacBook with the steps mentioned below.

And, that’s how to turn off screen mirroring if you are using a Mac.

6: Disabling the Screen Mirror Feature on a TV

The defaults for various TV models vary. That being said, the procedures may differ slightly. We recommend fiddling around with your phone and TV preferences.

On the other hand, we’ll demonstrate a few other methods for disabling the screen mirroring function on a TV.

You should check the app called “Samsung SmartThings.” In general, all Samsung devices come with this app pre-installed. However, if your device doesn’t have it, just reinstall it.

Here’s how to turn off screen mirroring on a Sony TV. You can go to Apps and select Screen Mirroring. Then, make sure that you disable the app. Also, if you own a Sony smartphone, you can follow the steps below to proceed.

You should know that many brands of TV come with a specific app to enable or disable Screen Mirroring. And that’s how to turn off screen mirroring on different devices.

Can you picture yourself being able to watch the shows and play those favorite games on the big screen? How about doing it whenever you want without ever having to activate screen mirroring? Sounds good, doesn’t it? Just get yourself an Amazon Fire Stick, and you’ll be set!

This little plug-in gadget measures only three inches in length, but it can store hundreds of hours of television.

Connect it with your existing Amazon account. All the purchased stuff will become available to you after that. Plugging this into any TV will let you feel right at home, even while away from home.

So, that’s basically about how to turn off screen mirroring. Do you want to know anything else about this matter? Please let us know.

How to Easily Show Battery Percentage on iPhone?

How Do You Know If Someone Turned Off Their Location on iOS Device?