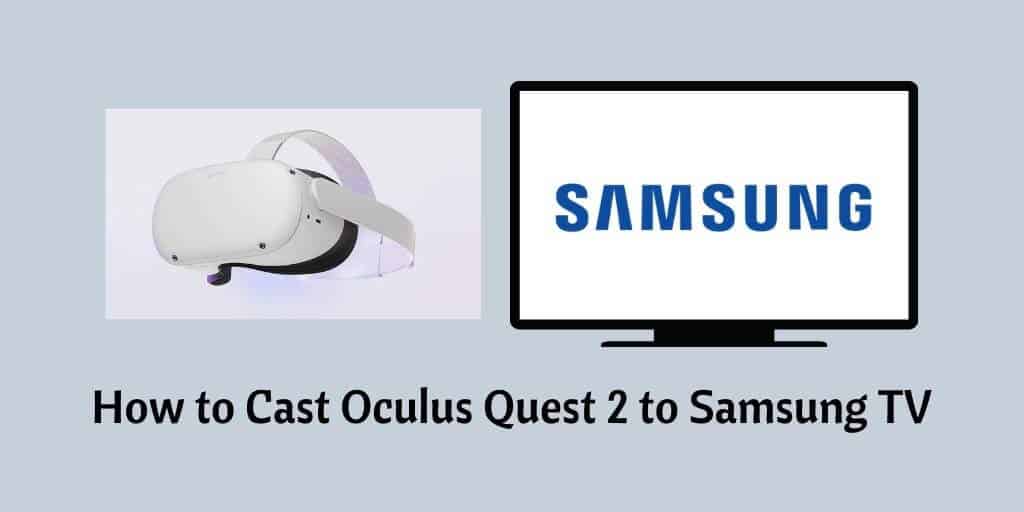 Do you want to learn how to cast Oculus Quest 2 to Samsung TV? We wrote this article explaining the most practical solutions to accomplish this task with ease.

All you need is to go ahead and read the instructions carefully.

Overview of Oculus Quest 2
So, How to Cast Oculus Quest 2 to Samsung TV?
It Makes Gaming More Fun
Solution 1: Use Airplay to Cast Your Oculus Quest 2
Solution 2: Use Chromecast
Solution 3: Use SmartThings
Solution 4: No Luck Yet? Here’s Another Method!
Instance 01: The App is Not Compatible with the Casting Feature
Instance 02: The Devices Are Connected to Different Networks

One of the best features of Oculus Quest 2 is the possibility of sharing its experience with loved ones. You can do it in the form of a group activity.

When using your Samsung TV, how do you send content from OC2? Imagine yourself and your loved ones taking turns playing a VR video game that features a terrifying haunted house.

We guarantee that everyone will be super excited and screaming. Let’s say you’re playing a game set in a haunted mansion. Add more excitement to it by using a Samsung TV with a BIG screen in your living room.

Assume that you want everyone to see what exactly the player sees as they go through the house. If so, there would be insanely funny and enjoyable situations for you.

Is it possible to connect the OQ 2 to your Samsung TV? If so, what should you do to accomplish that task?

So, How to Cast Oculus Quest 2 to Samsung TV?

Depending on the type of gadgets you have, you can use a number of different methods to cast. With those methods, you can cast from your OQ 2 to a Samsung TV.

The OQ 2 can be cast via Chromecast, Airplay, and a number of other apps. This includes the official app of Oculus and Samsung SmartThings.

Connecting the OQ2 to any Samsung TV can be done in a number of different ways. It all relies on the gadgets you have at your disposal. It is true that Airplay is already preinstalled on both the iOS and your Samsung TV. With that said, connecting the two devices couldn’t be simpler if you have an iPhone.

Do you want to cast to your Samsung TV unit from an Android device? If so, you might need to invest in a Chromecast. Whatever method you choose, you’re probably after the cheapest and simplest technique for casting to a Samsung TV.

Let’s take a deeper look at how some OQ 2 owners could cast headsets on Samsung TVs. With such an approach, you can turn the VR experience of OQ 2 into a much more exciting event.

This will surely bring hours of laughter and amusement. That is exactly why it is good to know how to cast Oculus Quest 2 to Samsung TV.

Let’s assume that you have followed all of those steps correctly. And what if you cannot cast your Oculus Quest device to the Samsung TV? If that’s the case, there can be some issues for which you may need to find solutions.

Besides, when it comes to VR games for kids, there are plenty of options. Here, we will reveal the best Oculus games for kids that will keep them entertained.

Solution 1: Use Airplay to Cast Your Oculus Quest 2

Using Airplay through iPhones or other Apple products is a simple way to cast your OC 2 to TV. Airplay should be standard on most Samsung TVs.

The same applies to your iPhone, iPad, etc. Because of this, casting is a breeze. Detailed instructions on how to cast using Airplay are provided below.

Be sure the Oculus app is installed on the respective iOS device before you begin. Once that’s done, follow the instructions below.

Using Airplay through an iPhone or other Apple product is a simple way to cast your Oculus Quest. Airplay should be standard on most Samsung TVs.

The same applies to your iPhone, iPad, etc. Because of this, casting is a breeze. Detailed instructions on how to cast using Airplay are provided below.

Be sure that your Oculus app is installed properly on the respective iOS device before you begin. Once that’s done, follow the instructions below.

Here’s another method if you wonder how to cast Oculus Quest 2 to Samsung TV. There are some Samsung TVs, particularly newer models, that may come with Chromecast already installed. However, this is not necessarily the case for the vast majority of Samsung TVs.

Check the TV’s owner’s handbook to determine if Chromecast is already included before buying a Chromecast unit. If it is not preinstalled, you’ll need to go out and buy a new Google Chromecast. The OQ 2 now supports casting to Google Chromecast, so you may use it with a Samsung TV unit.

First, please connect your Google Chromecast to the HDMI port on your Samsung TV. Also, if necessary, you should connect the TV’s AC power supply.

If you’ve already got your Chromecast set up and plugged on, you can proceed with the following steps.

Also, let’s figure out the most common reasons why your Samsung TV won’t turn on and the top solutions for you to fix this issue effortlessly.

With the apps Samsung SmartThings and Oculus, owners of Samsung phones can enjoy many wonders. They can project their virtual reality experiences from an OQ 2 onto a Smart TV with SmartThings.

Assume that you have got a Samsung phone and other Samsung devices (smart ones). In that case, the SmartThings application is a fantastic resource to have.

Instructions to use the SmartThings app and cast to a Samsung TV are provided below.

And that’s how to cast Oculus Quest 2 to Samsung TV.

Solution 4: No Luck Yet? Here’s Another Method!

Assume that you are certain that you’ve followed every necessary step for the specific mix of devices you own.

But what if your OQ 2 device still won’t cast to the Samsung TV? In that case, you may need to check these two potential issues very seriously.

Instance 01: The App is Not Compatible with the Casting Feature

The OQ 2 can run a wide variety of games and apps, but not all of them support casting. Apps listed in the Oculus marketplace should specify whether or not it is compatible with casting to other devices.

Let’s think that you’re sure that casting is turned on between your OQ 2 and Samsung TV. What if the game still isn’t playing on the big screen? If so, you may have to choose to switch to a different app or title.

Instance 02: The Devices Are Connected to Different Networks

To successfully cast from the OQ 2 to your Samsung TV, all devices should be linked to one network.

So, what you want to cast from your OQ 2 to your Samsung SmartTV is pretty clear. Just make sure that your phone, tablet, and TV are all on a single WiFi network.

That’s how to cast Oculus Quest 2 to Samsung TV. If you need any further clarification on any of the above information, please let us know.

How to Turn Off Screen Mirroring on iOS/Android/TV/PC?

Ways to Install Exodus Redux on Kodi and FireTV Stick