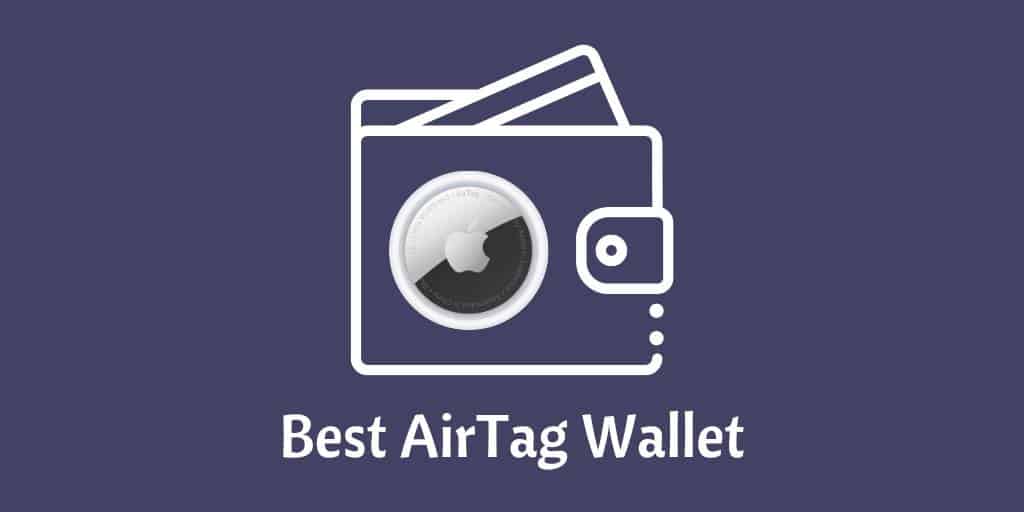 When you need to purchase the best AirTag wallet, doing some research is important.

The good news is that we were able to find some excellent products in the market for you. So, the remainder of this article will reveal those products for your reference.

Using Apple AirTags to keep a record of essential goods like wallets, keys, etc., is a breeze. Moreover, it won’t break the bank. That said, many individuals wonder what the best AirTag wallet is. If you are curious about the same thing, keep on reading!

The sheer variety of AirTag wallet holders on the market can be overwhelming, but don’t worry about it. We have spent time researching the best options on your behalf. With that said, we listed down the best products for your reference.

Besides, if you wonder does AirTag have GPS technology? If not, what is the technology it uses to transmit its location accurately to the linked iOS device? Let’s find out the truth.

It has a button to feature instant card access. In addition to that, you can put more than 10 cards in it. There is an inbuilt aluminum cardholder that can hold about six different cards in it.

The overall quality of the product is very impressive, and it is made using premium materials. Top-grain leather with 6063 T5 Aluminum that is anodized with a space grey color makes it a superior product.

When it comes to the security factor, this AirTag Wallet has RFID-blocking technology as well. It safeguards the cards in the wallet from potential skimmers. That will prevent unauthorized transactions and purchases. Basically, it prevents you from potential electronic pickpockets.

While the aviator community refers to it as a money clip, it is actually designed to hold your AirTag. There’re no Aviator models that this won’t work with, as it’s compatible with Slide One, Slide, and Classic. Replace the currency clip in your original wallet with this 3D-printed nylon AirTag holder.

When twisted, the clip proved to be nearly stiff. It has an AirTag slot in the middle and is available in either concrete gray or black.

Essentially the same in width and length as a conventional currency clip, the AirTag version is thicker. So it can accommodate the AirTag easily.

By designing the safest possible home for AirTag, Rossm has easily beaten out the competitors. It is also true that this product is not that expensive. To accommodate the AirTag, they hacked one of the exterior metal plates.

Other AirTag wallets feature a molded bag or pouch into which the AirTag can be easily inserted. However, Rossm has a different feature. One of those aluminum panels in Rossm is designed with an extruded region to accommodate the AirTag.

It is true that Rossm wallets are similar to Ridge when it comes to appearance. However, Ridge has decided to market their AirTag holders as an accessory. To create a new look, Rossm put their maximum efforts.

It’s obvious that this product appears tacked on. And to make matters worse, the AirTag is attached through a combination of screws and adhesive.

To install it, you should take out and replace seven of the smallest screws you might have ever seen. The AirTag is secured to this wallet by seven screws.

The removal of those would allow the AirTag to be removed. The battery needs to be changed every year. However, at least you only have to take the screws out yourself.

An improvement on its predecessor, this is a rather slim wallet that can contain your AirTag cards. In essence, it’s the same wallet with an AirTag pocket stitched onto the front flap.

The pull band that can eject ten cards is our favorite function. In my opinion, a pull tab is an essential feature of most cardholder wallets. Easy and speedy card access is achieved.

This product has white stitching along the edges to set it apart. A money strap in the back allows you to carry a few doubled-over bills (quartered). In general, its small size makes it a good candidate for stealth.

Kings Loot isn’t as well-known as Ekster, Bellroy, or Secrid when it comes to leather wallets. It’s all full-grain leather, but it comes with some very unique designs. In addition, they provide a lifetime guarantee on all of their wallets. In the world of leather wallets, this is unusual.

The process of setting up the system is quite easy. To insert an AirTag, you simply open one snap, slide it in, and close it again. When using the AirTag, it is a tight fit. That’s because it’s snapped into place. The AirTag will not fall off in the pocket or even at the register if the snap comes unfastened.

This product initially reminds one of a point n’ shoot camera. The moment you grab it, you will be looking for the camera’s shutter button.

It’s more like a sandwich than a traditional wallet, and it shares many design elements with Rossm’s AirTag. Made from outer and inner plates with 12 card slots each, this holder is held together by elastic bands.

A plastic plate custom-made to accommodate an Apple AirTag is attached to the front side of the wallet. The AirTag is held securely in place by two tabs, one on each end, which snap into the wallet.

Polycarbonate may be the material of choice, but this product’s imitation metal finish is impressive.

Simply slip a fingernail underneath the front plate and snap off the outer plate to attach the AirTag. After removing the plate, insert the AirTag into the wallet’s uncovered recess.

Thereafter, you should snap it back on to begin tracking your wallet. It fits this specific wallet like a glove and appears to be a factory-installed portion of the front panel.

Ekster first gained notoriety in 2017 when its premium leather cardholders became a hit. Such a thing happened in the Senate as well as the House of Representatives. Well, they individually expel up to six cards with an extremely efficient trigger mechanism.

Recently, its solid aluminum casing used to store the cards has been strengthened, and leather has been eliminated entirely. The case was already able to store nine cards, but they went ahead and added an additional metal plate. It is secured with a woven band so that it can carry 15 cards.

They improved upon this design with their latest iteration of the AirTag cardholder and which features a silicone strap. It also comes with an incorporated silicone pouch for AirTags. They also “hollowed down” its aluminum plate, making it the ideal size and shape for the AirTag’s foundation.

It’s far slimmer and more stylish than compared to Ekster’s leather AirTag we described in this article. Despite that, this product above, even though it can hold eight or nine cards in total.

When you place your AirTag in this best AirTag wallet, you will see that it is tightly held. This is specifically due to the silicon band. The tightness increased when you put more cards behind its aluminum plate.

All you need is to slip the AirTag underneath its silicon band. It should then reach the form-fitting pocket. The tension created by the silicon band can hold the AirTag in place stiffly.

Truth be told, an individual AirTag wallet isn’t something The Ridge produces. Instead, they came up with a conversion kit made of carbon fiber and metal. So, this can be easily added to any preexisting Ridge wallet. There is no doubt that this helps the budget.

However, the Ridge AirTag fix seems tacked on. But that’s not the worst part: the AirTag itself is attached by an adhesive back. Also, the cover is secured via a second adhesive ring.

An aluminum structure with 3M adhesive backing and carbon fiber cover are included in the package. It’s the only wallet discussed here in which the AirTag is concealed.

Anyway, it is a good option to consider if you are looking for the best AirTag wallet.

You should loosen three screws at the least and remove them to install your AirTag. After that, you can slide the metallic base located under the top plate before reinstalling the screws. Install your AirTag against the adhesive.

After that, you should remove the adhesive located in the metallic base. Press your AirTag against the adhesive after placing the carbon fiber cover on it.

What is the best AirTag wallet, in your opinion? Please share your thoughts with us.

Are AirTags Magnetic? If So, Why?